The Bombay high court on Friday directed the National Investigation Agency to get poet-activist Varavara Rao medically examined at the Nanavati hospital in north west Mumbai to check if he suffered from any ailments that warranted extension of his medical bail. 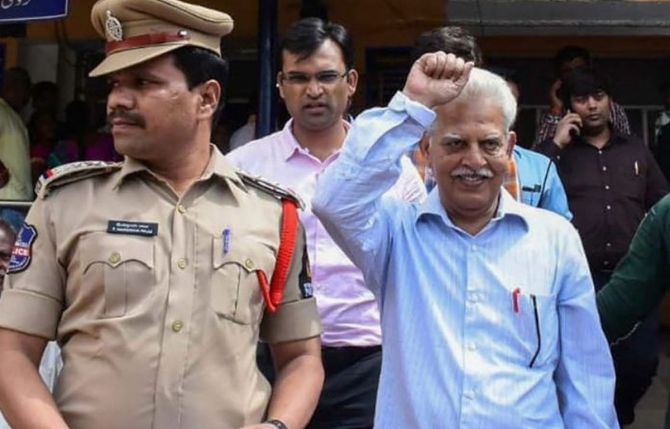 The court also extended till December 18 the time for Rao to surrender before the Taloja prison authorities.

As per the court's previous order, Professor Rao was to have been medically examined on November 18, but the NIA told the court on Friday it was yet to get his medical check up done.

NIA Counsel Sandesh Patil said the delay was caused because several doctors were required to check Professor Rao since the 83 year old was 'taking advantage of the court's order' and trying to get a comprehensive health check up done.

"At the time of seeking medical bail earlier this year, he (Professor Rao) had complained of cataract, hernia, and appendix. Now appendix and hernia are over and only cataract remains. But he is taking advantage of the court's order and trying to get all tests done," Patil alleged.

Justices Nitin Jamdar and S V Kotwal, however, questioned the NIA's submission and said the agency must take a practical approach and consider Rao's advanced age.

'The point here is to see whether he is still unwell and requires to be on medical bail. Consider his age. Suppose the medical exam reveals he is suffering from something else, then what will you (NIA) do?' the justices asked.

Professor Rao, an accused in the Elgar-Parishad Maoist links case, was granted temporary bail on health grounds by the high court in February this year.

He was required to surrender before the Taloja prison authorities on September 5, but he approached the high court through his counsels R Sathyanarayanan and senior counsel Anand Grover seeking an extension of such bail saying his health continued to be poor and that, if sent back to prison, it was likely to 'revert to what it was' at the time when he was granted bail.

His plea for extension was opposed by the NIA.

However, since September this year, the high court has extended Professor Rao's date of surrender, initially due to its inability to hear the plea because of paucity of time, and since November 18, to grant the NIA time to get him medically examined at the Nanavati hospital.

On Friday, advocate Grover told the high court that, in compliance with its orders, Professor Rao had been to the Nanvati hospital twice already, but on both occasions NIA representatives had failed to appear and the doctors at the hospital 'said they weren't sure if they could go on without the NIA'.

"The NIA wanted a medical examination, we didn't ask for it. I (Professor Rao) have been there twice, but NIA didn't come. I'll go whenever required," Grover said.

Patil then sought permission to get a representative of the hospital to explain the delay in conducting Professor Rao's medical examination.

The representative told the court that specialists, including a urologist and a psychiatrist, needed to evaluate Professor Rao's condition and sought two weeks time to submit his comprehensive medical report before the court.

All parties submitted that Professor Rao will be examined and his medical report will be submitted before the court's registry in December 16, after which the justices said it will examine his bail plea on December 17, and that he need not surrender to prison authorities till December 18.

Professor Rao, in his plea, has said he continues to suffer from multiple ailments, including urinary tract infection with recurrent hyponatremia, suspicion of Parkinsons' disease, lacunar infarcts in six major lobes of the brain, and some eye problems.

He stated in his plea that the Taloja prison was not equipped to cater to his medical problems and his health would certainly deteriorate and he might die if sent back to jail, and sought his medical bail be extended for another six months.