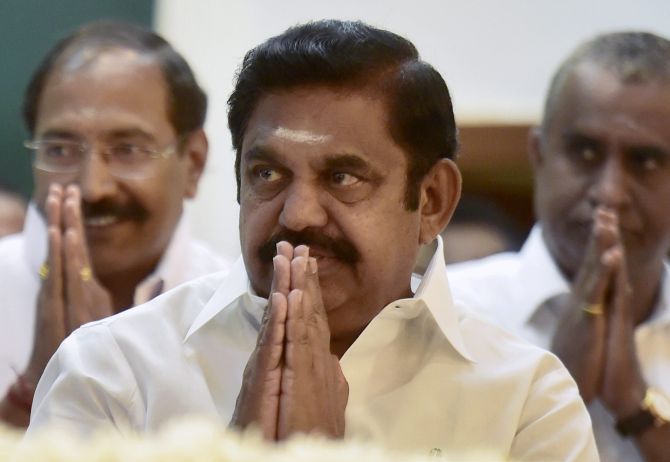 In a setback to Tamil Nadu Chief Minister Edappadi K Palaniswami, the Madras high court on Friday ordered a Central Bureau of Investigation probe into allegations of corruption in award of road contracts by him, triggering demands by the opposition parties for his resignation.

The court, which passed the order on a petition by the principal opposition Dravida Munnetra Kazhagam, held that the preliminary inquiry by the state Directorate of Vigilance and Anti-Corruption was nothing but a perfunctory exercise and had not been done in a fair manner.

"Hence, it has to benecessarily transferred to any other independent agency not under the control of the persons in power," Justice A D Jagadesh Chandira said in his order, observing that this case will certainly fall within the category of 'exceptional and rarest case'.

The judge had on October 9 reserved orders after the DVAC informed that no cognisable offence had been made out against the Chief Minister in the complaint lodged with it.

In its petition, the DMK, represented by its organising secretary R S Bharathi, has alleged irregularities and corruption in award of road contracts.

It has accused Palaniswami of abusing his power and allotting projects worth Rs 3,500 crore to his relatives and 'benamis'.

The court order is seen as a major embarrassment for the All India Anna Dravida Munnetra Kazhagam as Palaniswami will be the first chief minister in the state to face a CBI probe over corruption charges.

Palaniswami, the AIADMK joint coordinator, is the second minister of his cabinet to face CBI scrutiny after Health Minister C Vijayabaskar, who is under the scanner in connection with the multi-crore gutka scam.

The premises of Vijayabaskar besides that of state DGP K Rajendran, were searched by the CBI last month.

Palaniswami, who also holds the highways portfolio, has earlier rejected the allegations by the DMK and asserted that there were no irregularities in the award of contracts.

The court's direction prompted DMK President M K Stalin to demand the dismissal of Palaniswami by Governor Banwarilal Purohit if he did not step down on his own.

Welcoming the order, Stalin, in a statement, said Palaniswami should immediately step down to ensure an 'independent probe' into the matter.

Ruling AIADMK, came out in strong defence of its government and refuted corruption allegations of the DMK.

AIADMK senior leader C Ponnaiyan said the government would appeal against the high court's ruling and 'unbundle the lies', of the DMK.

Addressing reporters, Ponnaiyan, citing norms said those who had won road contracts were not relatives of Chief Minister K Palaniswami.

The firm that bagged the contract was in the civil contract business for over 30 years and had won bids worth crores of Rupees even during the past DMK regimes, he said.

DMK's charges were borne out of political vendetta to 'besmirch' the AIADMK government, which has been successfully implementing a slew of welfare measures, he said.

Hitting out at the DMK for 'scientific corruption', he said corruption during the previous regime of the main opposition party would be brought to light.

The DMK, which has been accusing the AIADMK government of 'rampant' corruption, had recently organised public meetings over the issue.

The party has also moved the court against some other state ministers levelling similar corruption charges and the petitions are pending.

Dinakaran, who was sidelined by Palaniswami and his cabinet colleagues last year, said the development had brought 'disrepute' to the state and expressed hope 'truth will very soon emerge'.

The judge in his order observed being a constitutional court it was aware of its limitations in ordering transfer of the investigation.

This extraordinary power must be exercised sparingly, cautiously and in exceptional situations wherein, it become necessary to provide credibility and to instill confidence in the minds of public, he said.

Originally, the petitioner wanted the court to direct the DVAC to conduct a preliminary inquiry and register an FIR on its complaint submitted in June this year.

Later, an additional plea was filed seeking transfer of the probe to an independent investigating team saying the DVAC was technically under the chief minister.

The judge said: "Probity in public life is a concern of all citizens. The interest of polity is to see that its public servants are above board. Probing into the probity of persons in high power is not an anathema."

"The allegations or accusations against the persons in power can be purged only through an independent investigation process which is fair, just, reasonable and transparent which a public servant should find as a stage to vindicate his stand," the judge said.

Asking the DVAC to hand over all relevant documents to the CBI within a week, the judged directed the central agency to conclude its investigation within three months, adding if prima facie case was made out it could proceed further.