SAD leader Bikram Singh Majithia, facing arrest in an NDPS case, involving sale, purchase and manufacturing of drugs among other offences, was on Monday granted anticipatory bail by the Punjab and Haryana High Court. A bench of Justice Lisa Gill, however, asked the SAD leader to join investigation with the police.

While granting Majithia the pre-arrest bail, Justice Gill also asked him to not to leave the country till the next date of hearing and share his live location with the investigating agency through WhatsApp.

The Shiromani Akali Dal (SAD) leader's counsel, Damanbir Singh Sobti, said Majithia will join the investigation at 11 am on Wednesday.

"In the event of his arrest, petitioner shall be released on interim bail till the next date of hearing to the satisfaction of Investigating / arresting Officer," Justice Gill said in in the order.

"….keeping in view the facts and circumstances, it is considered expedient at this stage, that the petitioner at the first instance, should join investigation," he added.

Accordingly, it is directed that the petitioner should appear before the Investigating Officer on January 12 at 11 am. He shall fully cooperate in the investigation of this case," he added.

He had moved the high court for anticipatory bail after a Mohali court dismissed his pre-arrest bail plea on December 24.

Listing the matter for further hearing on January 18, the judge said, "Needless to say, the present interim order is without prejudice to the right of the prosecution to press for custodial interrogation, if required."

Hearing took place through video conferencing because of Covid-19.

Justice Lisa Gill directed that the petitioner shall further appear before the investigating agency as and when required and shall provide his mobile number to it which would be available and switched on at all times.

"Petitioner shall not directly or indirectly try to contact any of the witnesses or anyone connected with the case in any manner," said the order while directing Majithia to abide by these conditions.

Earlier, Majithia's counsel Sobti said, "After seeing all the records, the high court gave directions that this is a case where he can join the investigation and when he joins the investigation, he will not be arrested."

Replying to a question, Sobti said certain "additional facts" were brought to the court's notice, claiming that former Punjab DGP Siddharth Chattopadhyaya had promoted Assistant Inspector General Balraj Singh's son Princepreet Singh from the rank of sub-inspector to that of inspector by using special powers.

Balraj Singh is the head of the special investigation team that is probing the case against Majithia.

The SAD has been alleging that the FIR against Majithia is a result of "political vendetta".

Reacting to the relief granted to Majithia, SAD chief Sukhbir Singh Badal, in a tweet, said "justice prevails", while his wife Harsimrat Kaur Badal said "truth always triumphs, no matter how big the lie is".

Majithia is the brother-in-law of Sukhbir Singh Badal and the brother of former Union minister Harsimrat Kaur Badal.

Reacting to the development, Punjab Chief Minister Charanjit Singh Channi, in Moga, said interim bail does not mean the case is over and Majithia will have to join the probe on Wednesday.

The former Punjab minister was booked under the NDPS Act on the basis of a 2018 report of a probe into the drug racket in the state.

The report was filed by anti-drug special task force (STF) chief Harpreet Singh Sidhu in the Punjab and Haryana High Court in 2018.

The 49-page FIR in the matter was registered by the state Crime Branch at its Mohali police station.

Majithia was booked under sections 25 (punishment for allowing one's premises for its use for the commission of an offence), 27A (for financing sale, purchase, production, manufacture, possession, transportation, use or consumption, import and export or any act pertaining to narcotics) and 29 (abetting or plotting an offence) of the NDPS Act.

In his bail plea, the SAD leader had submitted that the Congress government in Punjab had "left no stone unturned to misuse its powers and position for wreaking vengeance upon its political opponents".

The Channi government had come under attack from the Aam Aadmi Party and even from state Congress chief Navjot Singh Sidhu for not being able to arrest Majithia, though the police had conducted raids to nab him.

Photos of Majithia, showing him at the Golden Temple, had also gone viral on social media.

Punjab Home Minister Sukhjinder Singh Randhawa, however, had dubbed the photos as "fake". 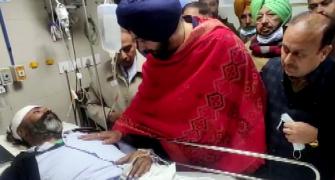 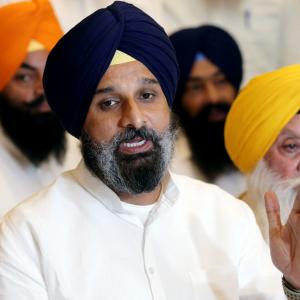