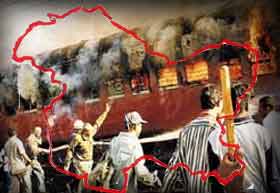 The Gujarat high court on Tuesday granted bail to three people who were sentenced to life imprisonment in the 2002 Godhra train burning case which had triggered communal riots in the state. A two-judge bench of Justice Aqeel Qureshi and Justice R P Dholaria granted bail to Irfan Pada, Suleiman Pir and Qasim Abdul Sattar alias 'Qasim Biryani', who were given life imprisonment, while also rejecting bail applications of eleven others awarded life imprisonment.

They also submitted that they had been in jail for the last 11 years and a hearing on appeals against their conviction may take a long time, their advocate I H Syed said. They contended that Abdul Majid, one of those convicted, was granted bail by the Supreme Court on the ground that hearing his appeal may take time.

However, bail applications of the 11 who were awarded life terms, were rejected by the court on the ground that they had absconded after the train burning incident.

In February 2011, a special court had sentenced 11 people to death and 20 to life imprisonment for burning the S-6 coach of the Sabarmati Express in February 2002 near Godhra railway station, in which 59 people, mostly kar sevaks were killed.