Hazare to launch fast for Lokpal Bill during winter session 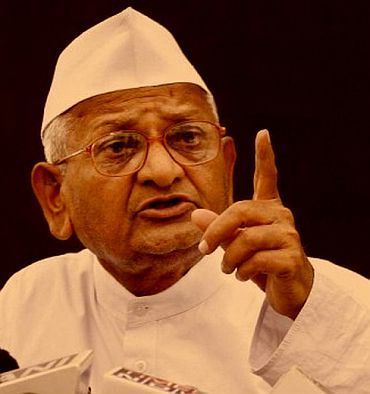 Anti-corruption crusader Anna Hazare said on Friday he will start a 'satyagraha' in New Delhi on the first day of winter session, for the passage of Jan Lokpal Bill in Parliament.

Prime Minister Manmohan Singh had assured to pass the Jan Lokpal Bill in the last monsoon session. But the central government did not present the bill in Rajya Sabha as assured, Hazare said at his Ralegan Siddhi village about 40 km from Ahmednagar.

"I will start a hunger strike at Ramlila Maidan in Delhi and the people must agitate in their tehsil, DM's offices, till we get a strong Jan Lokpal," said the activist, who is busy making micro plans for his forthcoming nationwide agitation for the anti-corruption Bill.

Hazare appealed to the nation and the youths to organise a non-violent 'satyagraha' along with him, similar to the one he took up on August 16, 2011.

The subsequent popular agitation had forced the government to convene a special meet of Parliament, which passed a resolution, agreeing with three of his crucial demands.

The septuagenarian demanded that the prime minister should urge the President to convene a special session of Parliament as the Bill is pending for close to two years after being passed in Lok Sabha.

After being passed in the Lok Sabha in December 2011, the nill was referred to a select committee of the Rajya Sabha, which is yet to submit its report.

The government lacks the will to stop corruption and bring in Jan Lokpal Bill, while it has passed lot of other bills like on food security, land, election reforms, pension, etc, Hazare lamented. The activist had earlier this year toured the country after the formation of Jantantra Morcha.