Manish Tewari's public expression of regret for his outburst against Anna Hazare has failed to cut much ice with the anti-corruption crusader, who Thursday sent a legal notice to the Congress spokesman seeking a written apology for calling him corrupt from "head to toe".

Hazare's lawyer Milind Pawar sent the notice by email and registered post to Tewari on the instructions of the Gandhian.

Pawar had earlier said a defamation case would be filed against the Congress MP in a Pune court for casting aspersions on Hazare.

The notice calls upon Tewari to "apologise with written application by you and on behalf of your party, undertaking not to commit such false imputations and defamatory statements (about Hazare) in future".

It says the Congress leader had committed offence under sections 499 and 500 of IPC by his defamatory references to Hazare.

The Gandhian was targeted by Congress for the first time after Tewari cited the Sawant commission report and accused him of being "steeped in corruption from head to toe".

"The Sawant commission ripped apart the moral core of Hazare as it found him steeped in corruption from head to toe," Tewari had said.

Facing public criticism for attacking Hazare, the Congress leader, who disappeared from TV screens for several days in the wake of the comments, resurfaced and expressed his regret.

"I know some of my recent utterances have caused hurt to Mr Hazare. I regret the same and I would like to appeal to him as a citizen of this country to end his fast," he said, adding "In the course of political cut and thrust, certain things are inadvertently said which cause pain."

Pawar said Congress spokesman has also been asked to clarify as to whether what he had said was his personal view or that of his party.

He said legal action will be initiated in "civil and criminal court" if Tewari failed to tender a written apology as demanded through the notice. 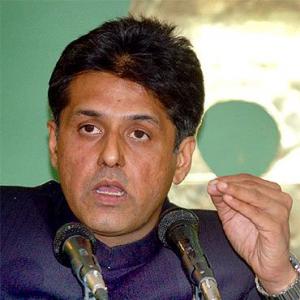