Why did Majlis-e-Ittehadul Muslimeen leader Akbaruddin Owaisi's make his recent hate speech that has landed in hot waters? Was he appealing to the base elements in his community, or was there a grander design behind it?

What provoked Owaisi to make such a speech?

The Majlis-e-Ittehadul Muslimeen is facing a downfall. They are not as strong as they used to be in Hyderabad or the rest of Andhra Pradesh. The hate speech was nothing but an attempt to garner the support of Muslims.

Has it had an impact among Muslims?

Barring a few in the community, the rest are not impressed at all. This speech had special effects, but in the long run will not help either the Muslims or Owaisi himself. He cannot become a hero of the Muslims by making such hate speeches.

What do such speeches do to society? Does the divide grow further?

I hope the divide does not grow any further. The seculars have to step in and ensure that hate speech givers from both communities are not allowed to go away scot-free and influence the minds of people. Owaisi needs to understand that we live in a country where we are a minority. We have to take into consideration the majority community as well. There is no point in making such a speech. Such speeches -- either by the MIM or Togadia (VHP leader Praveen Togadia) -- won't do any good to society.

What are your views on the stand taken by the Kiran Kumar Reddy government in Andhra Pradesh?

They have to act against any person making such speeches. There is no point sitting silent. The MIM wants to increase its vote bank and also dislodge the government. The MIM has made several demands but the government has not fulfilled them, hence they decided to withdraw support. Now that the elections are nearing they are trying hard to create a vote bank, but little do they realise this is not the way.

In the midst of all this, the development of the old city of Hyderabad takes a backseat. What are your views?

The MIM thinks they are uniting the Muslims through such speeches. I agree that the old city is in a mess; there are no roads and the entire area is filled with mosquitoes. This is not a sign of development; the MIM ought to have prioritised.

How do you rate the two brothers -- Asad Owaisi and Abkar Owaisi?

Both are trying to become heroes of the Muslims by adopting similar tactics. Asad posed as the leader of the Muslims at the national level, whereas Akbar did it at the state level.

You say that such a speech will not have an impact on the Muslims but the crowd seemed to be overwhelmed when Owaisi made the speech.

People from Hyderabad were taken in 40 cars to attend that event. His (Owaisi's) men were all in the front rows clapping for him which gave an impression that everyone was supporting him. A few people clapping in the crowds does not mean the entire Muslim community is supporting what he said. People are educated now and they will judge whether Owaisi was right or not.

Your message for Owaisi?

Islam prohibits hate against other religions and God himself has said so in the Quran.

Vicky Nanjappa in Bengaluru
Print this article
Carry on Mr Owaisi, you are a genuine secular leader 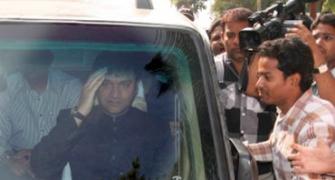 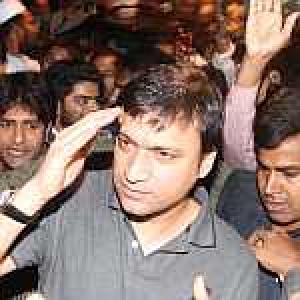