Bangladesh Prime Minister Sheikh Hasina on Tuesday instructed her home minister to initiate immediate action against those who incited violence using religion as she asked the people not to trust anything on social media without fact-checking. 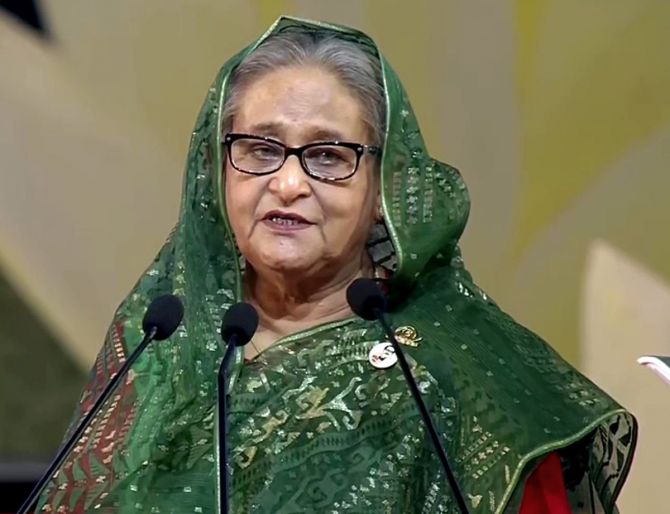 The foreign ministry said in a statement that domestic elements that opposed Bangladesh's independence from Pakistan 50 year ago were still propagating their "toxic narratives to instigate violence, hatred and bigotry”.

Attacks on Hindu temples have intensified in Bangladesh since last Wednesday after an alleged blasphemous post surfaced on social media during the Durga Puja celebrations. On late Sunday night, a mob damaged 66 houses and set on fire at least 20 homes of Hindus in Bangladesh.

Prime Minister Hasina, who joined the meeting through video conferencing from her official residence, also urged the people of the country not to trust anything on social media without fact-checking, he added.

She has instructed the home ministry to remain vigilant and take steps to prevent such incidents from recurring, Islam said.

"The Comilla incident is being investigated. What really happened can be known soon,” he said, adding that the home ministry is working to bring the perpetrators to justice.

Prime Minister Hasina has promised to bring to justice the perpetrators of recent violence. She has announced to provide all possible assistance to the affected families.

The foreign ministry statement underlined that the Government of Bangladesh "unequivocally condemned those incidents and took serious note of the reactions from within and outside the Hindu community."

Regrettably, it said, the domestic elements that opposed Bangladesh's independence from Pakistan 50 year ago were still propagating their "toxic narratives to instigate violence, hatred and bigotry”.

But the government took quick steps to contain the disturbing situation, calling out paramilitary and other elite law enforcement forces to support police and administration to secure the Hindu religious sites and idols, it said.

Police have arrested 450 suspected attackers in different parts of the country and a manhunt was underway to track down more.

“A total of 71 cases were filed and so far 450 people were arrested. The figure of cases and arrests could rise as a manhunt is underway to track down the culprits who are on the run to evade justice,” a police spokesman said.

"The Government remains committed to prevent the recurrence of such untoward incidents and would expect that further complication or misunderstanding would be averted through responsible and fact-based reporting through all media platforms," the foreign office statement said.

The statement claimed that Bangladesh is perhaps the only country where the major religious festivals of all religions are observed as public holidays.

This year, on the occasion of Durga Puja, the Prime Minister donated Taka 30 million (USD 35,000) to the Hindu Kalyan Trust for the smooth observance of the festival.

Meanwhile, the ruling Awami League party organised 'harmony rallies' and took out peace processions across the country on Tuesday against the recent communal violence.

"Do not fear, Hindu brothers and sisters. Sheikh Hasina and the Awami League are with you. Sheikh Hasina's government is a minority-friendly government," Awami League General Secretary Obaidul Quader said at a rally in front of the party's central office on Bangabandhu Avenue here.

He asked his party members to build resistance against communal forces, The Daily Star newspaper reported.

He said that the ruling party will remain on the streets till the communal forces are dealt with.

Party's leaders and workers all over the country are ready to give a proper reply to these forces, he was quoted as saying by the paper.