In a jolt to the Congress, the Bharatiya Janata Party’s Krishan Lal Panwar and the saffron party-backed Independent candidate Kartikeya Sharma were declared elected for the two Rajya Sabha seats from Haryana, after a high drama over allegations of violations of polling rules that delayed the counting by more than seven hours.

The counting of votes began past midnight and the results were announced after 2 am on Saturday. 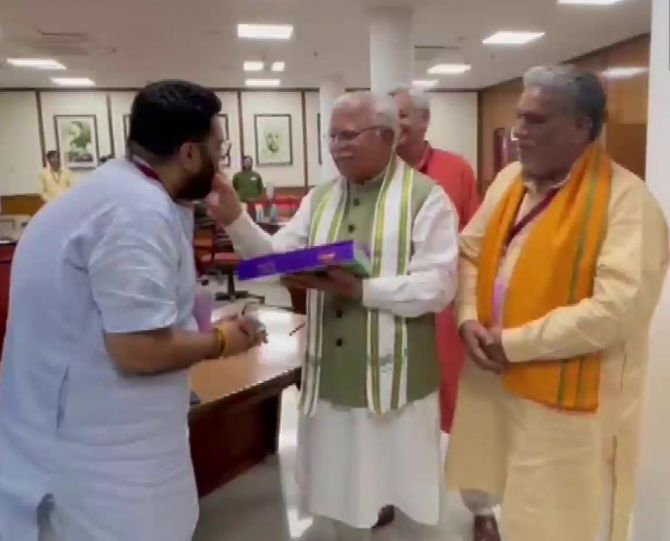 According to Election Commission officials, Congress candidates Ajay Maken did not get enough votes. The party said one of its MLAs cross-voted while the vote of an MLA was declared invalid.

Returning Officer R K Nandal said Panwar got 36 votes, while Sharma got 23 first preference votes and 6.6 transferred from the BJP, taking his tally to 29.6. It was a photo-finish as Maken got 29 votes, but lost on account of no second preference votes.

While the value of votes polled by the BJP was 3,600, securing the first seat for Panwar, Sharma won the second seat with a vote value of 2,960, including 660 that got transferred from the BJP candidate as second preference votes. The Congress' value of votes was 2,900.

Congress MLA and the party's authorised polling agent BB Batra said while the vote of a party MLA was declared invalid, MLA Kuldeep Bishnoi cross-voted for Sharma, a media baron who had entered the poll far as an Independent candidate supported by the BJP and its ally JJP.

Both the winning candidates were presented with their victory certificates around 3.30 am as Chief Minister Manohar Lal Khattar congratulated them.

Speaking to reporters in the Vidhan Sabha complex shortly after 4 am, Khattar said, "I thank all those MLAs who voted for the BJP candidate and the Independent candidate. This in a way is a victory for the people of Haryana and a victory of democracy."

Replying to a question on Congress' Kuldeep Bishnoi voting for Sharma, Khattar said, "He voted listening to his inner conscience. I can say that he must have voted after being influenced by the policies and achievements of the Modi government. He did not bother what action the Congress will take...I congratulate him."

"The party will welcome him if he joins it," the BJP leader said when asked if the BJP's doors are open to him. "Hooda Sahab ka bhi swagat hai (even formers Congress chief minister Bhupinder Singh Hooda is welcome)."

When asked about the reports of recounting of votes having taken place, Khattar said the Congress had demanded a recount, and the BJP and JJP did not object.

"They (the Congress) thought they had got 30 votes," said Khattar of Congress, adding while Bishnoi did not vote for the Congress candidate, one vote of their candidate was declared invalid.

The Congress has 31 MLAs.

Kartikeya's father Benod Sharma, who was formerly a Congress leader, said, "I was sure of Kartikeya's victory. I am happy that he won."

The results are also a setback for former Congress chief minister Bhupinder Singh Hooda as the party had recently replaced Kumari Selja as its state unit chief with his loyalist Udai Bhan.

The counting was put on hold after the BJP and Sharma wrote to the EC alleging violation of rules and demanded the votes of two Congress MLAs -- Kiran Choudhary and B B Batra -- be declared invalid as they had allegedly showed their ballot papers to unauthorised persons after marking them.

Election Commission sources in Delhi said the demand was rejected.

The Congress had also approached the Election Commission accusing the BJP of trying to defeat the process of free and fair election, and it demanded immediate declaration of results.

Eighty-nine of a total of 90 MLAs in Haryana had cast their votes while Independent MLA Balraj Kundu had abstained.

The BJP with 40 MLAs had nine more than the 31 first preference votes required for a straight win. The Congress has 31 MLAs.

Congress's Bishnoi was among the first to cast their votes immediately after polling began at 9 am, while the majority of his party's legislators arrived in Chandigarh from Raipur via Delhi later in the day.

The Congress had shifted its MLAs to Raipur a week ago, fearing poaching of its legislators.

Independent MLA Kundu, who has been vocal against the BJP-led government on several issues, remained firm in his decision to abstain. "I received many offers, including monetary. But I decided to act as per my conscience," the Meham MLA told reporters.

Home Minister Anil Vij and state BJP chief O P Dhankar visited his home to persuade him, but to no avail.

Kundu also hit out at the Congress for fielding Maken, "an outsider".

"Therefore, due to these reasons, I have decided not to cast my vote and abstain from voting," he said.

Bishnoi arrived in Chandigarh on Thursday evening from Delhi. He was not among the Congress MLAs who were lodged in the resort in Raipur.