Police had to face a tough situation on Monday as migrant workers, stranded in Haryana amid the lockdown and wanting to go back to their homes in different parts of the country, came out on the roads at a few places including Yamunanagar and Jind districts. 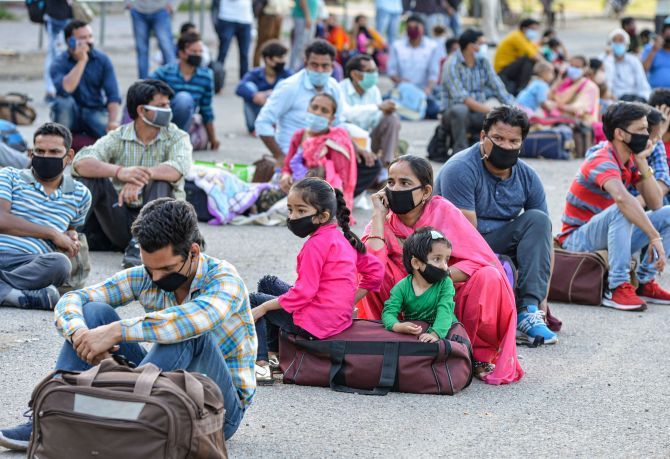 At Yamunanagar, as police tried to disperse a big gathering of migrants, a few among them allegedly pelted stones at the cops, police said.

However, no injuries were reported.

Police said they received information that migrant labourers in the Jouria area of Yamunanagar had come out in large numbers violating social distancing and lockdown norms.

When police reached there, a few migrants started throwing stones at them. Many factories where the migrants worked are located in the area near which the workers have been putting up during the lockdown.

Police dispersed them and asked them to go back to the places where they were staying. The situation in the area was brought under control.

Some migrant workers claimed they were not paid wages by their employers and wanted to go back to their homes, mostly in Uttar Pradesh and Bihar.

There were reports that migrants in large numbers came out on the roads in Jind after which police had to persuade them to stay wherever they were, telling them that the government was making arrangements to send them back home.

Chief Minister M L Khattar had on Sunday said the migrant labourers, who are stranded in the state due to the coronavirus-triggered lockdown, would be sent back to their homes in a safe and systematic manner at the earliest.

The Haryana government has also launched a web portal where migrant workers in the state who want to return to their native places can register.

The state government on Monday said they have made elaborate arrangements to send migrant workers/labourers of Bihar, Jharkhand and Madhya Pradesh to their home states free of cost by special Shramik trains from different stations in Haryana in a safe and systematic manner.

As the number of migrant labourers from the other states is few in Haryana, therefore their return will be ensured through special trains running from New Delhi, an official statement said.

Apart from this, elaborate arrangements are being made to send agricultural labourers of bordering states of Uttar Pradesh, Rajasthan, Punjab, Uttarakhand and Himachal Pradesh to their homes in buses.

Additional Chief Secretary, Home Department, Vijai Vardhan has appealed to the migrant labourers to stay where they are staying at present and follow social distancing norms.

Elaborate arrangements are being made by the State Government to send them to their home states.

The Haryana government has also designated various nodal officers to coordinate with other states for the same, he informed.

Officials said that all such migrant labourers willing to travel back to their homes would have to mandatorily get themselves registered on the web portal.