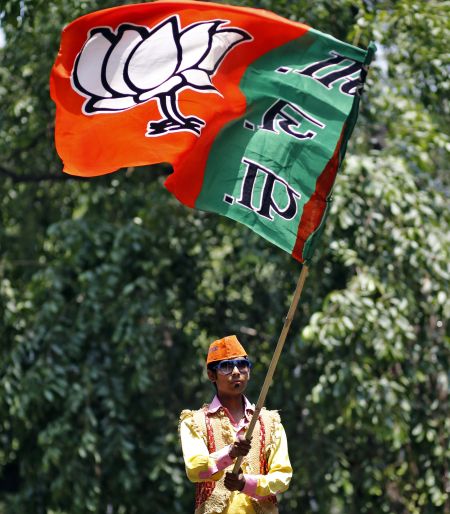 The Bharatiya Janata Party, which is eyeing a majority government in Haryana, has launched a high-pitched poll campaign by pressing its top leadership into campaigning to realise its target of ‘Mission 60 plus’ seats in the state.

While Prime Minister Modi during his three visits has already addressed eight public meetings covering various parts of the Congress-ruled state, a number of other top BJP leaders have also been involved in the campaign.

In the past, the saffron party that was restricted to playing second fiddle to Indian National Lok Dal and the then Bansi Lal-led Haryana Vikas Party (later merged with Congress), is for the first time contesting from all the 90 assembly seats on its own.

From having six legislators in 2000, two in 2005 and just four in 2009, BJP is hoping to wrest power from the Congress, which has been in power in the state for the past two consecutive terms.

“People gave us overwhelming support in the Lok Sabha polls. They are fed up with the Congress rule in the state, which has taken Haryana backward with corruption, land scams, poor law and order, unemployment and lopsided development. These have been the main achievements of the Hooda government,” BJP spokesman and party candidate from Narnaund assembly segment, Capt Abhimanyu said.

He said the BJP will form the next government in the state “with a comfortable majority”.

BJP’s best electoral performance in the state so far has been winning 16 seats out of the 20 contested by the party in 1987, when Devi Lal-led INLD had swept to power. However, in 1991, BJP again went down, managing to win just two seats. In 1996, the party went on to win 11 seats.

The challenge for the BJP in Haryana has been to find a leader who would match former Deputy Chief Minister Dr Mangal Sain’s aura.

Even for the October 15 polls, the BJP is fighting the polls under the leadership of Narendra Modi and has not named any chief ministerial candidate.

The party has also attempted to break away from its non-Jat urban identity by accommodating many Jat candidates in the first list of candidates.

The people will once again bring back Congress on the basis of development work which the ruling outfit has carried out in the state, he said.