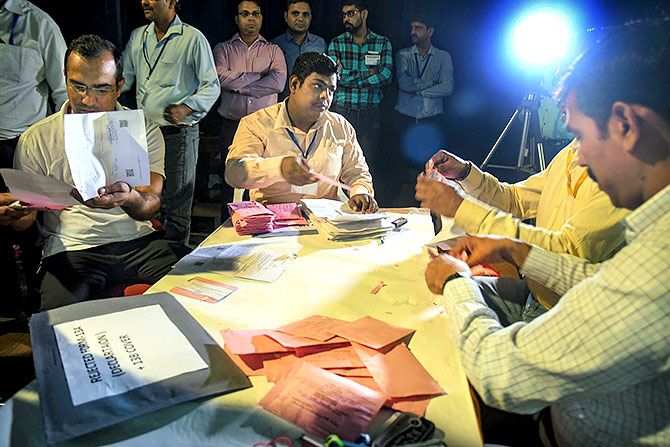 Eight Haryana ministers lost the assembly elections, which saw just two of the 10 ministers fielded by the ruling Bharatiya Janata Party returning to the state assembly.

Vij drubbed Congress rebel Chitra Sarwara, who fought as independent, by over 20,000 votes.

The BJP had earlier denied tickets to two of its ministers -- Vipul Goel and Rao Narbir Singh.

Grover and Kamboj lost to their rivals by just over 2,000 votes, whereas other ministers faced defeat by over 10,000 votes.

Lone woman minister in the Khattar cabinet, Kavita Jain, a three-time MLA, lost her traditional Sonipat seat to Surender Panwar of the Congress by a margin of over 32,000 votes.

Among the other prominent faces for the ruling BJP who tasted defeat in the elections was its state president Subhash Barala.

He lost the contest from Tohana to Jannayak Janta Party candidate Devender Singh by a huge margin of 52,302 votes.

The three-time legislator and Congress's chief spokesperson was defeated by a margin of 1,246 votes. It was a second blow to Surjewala, who had tasted defeat in the Jind by-elections early this year.

Congress candidate and former Haryana assembly speaker Kuldeep Sharma also faced defeat at the hands of BJP nominee Nirmal Rani from Ganaur. Sharma was defeated with a margin of over 10,000 votes.

Former Board of Control for Cricket in India president Ranbir Singh Mahendra's defeat was another setback for the party. He lost to JJP's Naina Chauatla from Badhra with a margin of over 13,000 votes.

Congress candidate Ashok Arora, who switched over from the INLD before the polls, was defeated by BJP's Subhash Sudha from Thanesar.