Kamala Harris, daughter of immigrants, scripted history as she broke the glass ceiling in the world's oldest democracy to be elected America's first Black and South Asian-descent woman Vice President, the latest entrant to a growing list of Indian-origin lawmakers rising the political ladder and occupying influential positions in governments across the world. 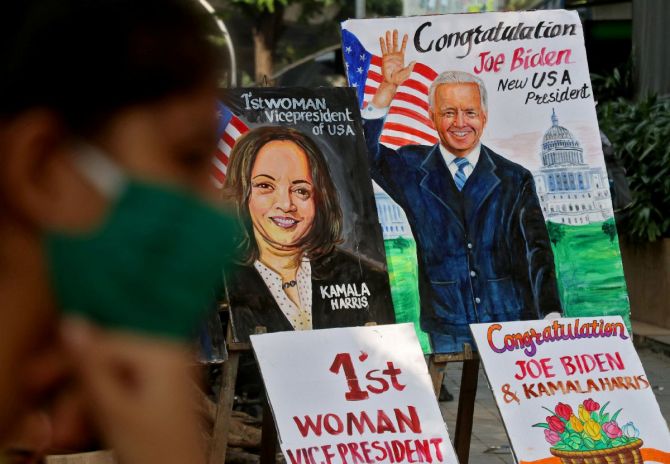 IMAGE: A girl sits next to the paintings of US President-elect Joe Biden and Vice President-elect Kamala Harris on display alongside a road in Mumbai. Photograph: Niharika Kulkarni/Reuters

Countries across the world -- from the United States, the United Kingdom, Canada to Singapore and New Zealand, are witnessing phenomenal strides by Indian-origin politicians, who are now taking on influential and prominent roles in governments and cabinets.

Harris's historic political elevation is a milestone for the four-million strong Indian diaspora in the US -- an achievement by an Indian-origin lawmaker that is not limited only to America but one that is being witnessed across the world as more and more people of Indian-descent are named as ministers and policy makers in cabinets that are increasingly becoming more diverse.

It must be noted that while Indian-origin politicians may be a source of nationalist and cultural pride for India, they are unlikely to provide any diplomatic or political leverage and their policies most definitely align with that of their countries of nationality.

Nonetheless, their political elevation has helped enhance India's reputation and visibility while demonstrating the far and wide spread of the thriving Indian diaspora.

The 48-year-old former US Ambassador to the United Nations, Haley is seen as a potential Republican candidate for President in 2024.

She also has the distinction of being the first ever Indian-American Cabinet ranking official in any administration.

Haley was the first female governor of South Carolina and was at the time also the youngest governor in the US and only the second person of Indian descent to become a governor of the country.

In another first, Radhakrishnan can be seen in a old video addressing her country's Parliament in Malayalam.

Born in India, Radhakrishnan, 41, went to school in Singapore before moving to New Zealand. She has spent her work life advocating on behalf of people whose voices are often unheard -- women survivors of domestic violence, and migrant workers who have been exploited.

She was elected first as a Member of Parliament belonging to the Labour Party in September 2017 and in 2019, she was appointed the Parliamentary Private Secretary to the Minister for Ethnic Communities.

Sajjan, 50, was first elected as Member of Parliament for Vancouver South in 2015.

He immigrated to Canada from India with his family when he was five years old and grew up in South Vancouver.

Sajjan has served as a former detective with the Vancouver Police Department, a former Lieutenant Colonel with the British Columbia Regiment, and is a long-time advocate for youth education and mentorship programmes according to profile.

For 11 years, Sajjan was a member of the Vancouver Police Department.

As a member of the British Columbia Regiment, he participated in four operational deployments, three of them to Afghanistan.

Patel, 48, was appointed Secretary of State for the Home Department in July 2019.

She was Secretary of State for International Development from July 2016 to November 2017 and also served as Minister of State for Employment from May 2015 until July 2016.

She was Exchequer Secretary to the Treasury from July 2014 to May 2015.

Sunak, 40, was appointed Chancellor of the Exchequer in February this year.

He was previously Chief Secretary to the Treasury and Parliamentary Under Secretary of State at the Ministry of Housing, Communities and Local Government.

He was elected Conservative MP in May 2015 and served as a Parliamentary Private Secretary at the Department for Business, Energy and Industrial Strategy from June 2017 until his ministerial appointment.

In 2017, Varadkar scripted history by becoming the youngest and the first openly gay prime minister of the Catholic-majority country.

Varadkar, 41, qualified as a doctor was first elected as a councillor at the age of 24.

In June this year, Varadkar stepped down to make way for new Irish Prime Minister Micheal Martin as part of a historic coalition deal which will see him return as the Prime Minister in over two years' time.

Singh's Workers' Party won 10 parliamentary seats out of the 93 it contested in the July 2020 General Election, making it the biggest Opposition presence in Singapore's parliamentary history.

While there have been de facto leaders of the Opposition in the past, this is the first time the position is being recognised officially.

The 41-year-old leader has vowed to do his best to serve the people.

It is not just in the political arena that Indian-origin leaders are making their presence felt.

Some of the biggest global companies have also been helmed by Indian-origin chief executives such as Indra Nooyi at PepsiCo, Ajay Banga at MasterCard, Satya Nadella at Microsoft and Sundar Pichai at Alphabet and Google.