With the historic electoral win by Vice President-elect Kamala Harris, her husband Douglas Emhoff also scripted history as he will be the first 'Second Gentleman' -- the first male spouse of a vice president in the United States when she takes the oath of office in January. 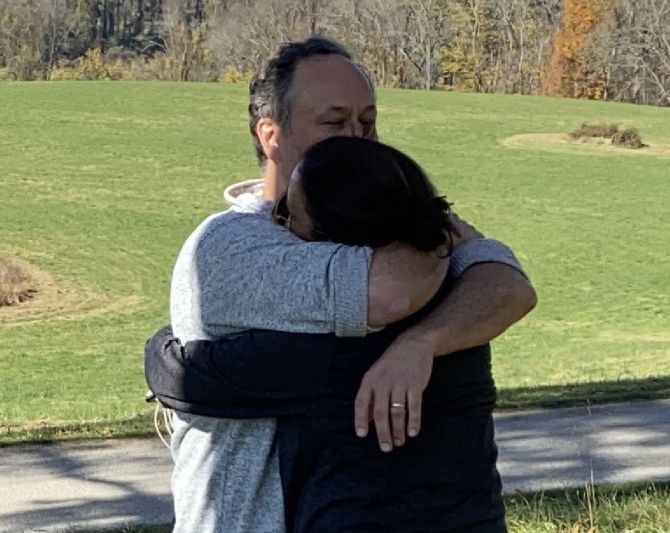 IMAGE: Douglas Emhoff tweeted this picture of him and Kamala Harris hugging on Saturday as TV networks called the presidential race for Biden and Harris. Photograph: Kind courtesy @DouglasEmhoff/Twitter

The wife of a US President is addressed as First Lady while that of Vice President as Second Lady.

America has never in its history before had a female President and Vice President so it remains to be seen what formal title -- 'Second Gentleman, Second Husband' -- will be given to the first male spouse of an elected leader.

Harris is married to Emhoff, 56, a successful entertainment lawyer, who has been a strong and supportive presence for Harris during the election campaign.

'So proud of you,' Emhoff tweeted on Saturday, with a picture of him and Harris hugging as TV networks called the presidential race for Biden and Harris.

A report in CNN said Emhoff has been away from the spotlight, often seen backstage or at the edge of the crowd at Harris' events sporting a 'Kamala' T-shirt.

Emhoff garnered attention last year when he rushed onstage to protect Harris after a protester came close enough to the senator to grab her microphone, CNN said.

He has also staunchly defended Harris when Donald Trump Jr, the President's son, retweeted a racist lie that Harris is not a Black American because her parents immigrated from Jamaica and India.

Harris often talks about how she and Emhoff met after they were set up on a blind date in 2013 by Harris' best friend when she was California's attorney general. Emhoff has two children Cole and Ella from a previous marriage.

Emhoff proposed to Harris in 2014 and the two were married at the courthouse in Santa Barbara later that year in a ceremony officiated by Harris' sister Maya.

'We met, fell madly in love (still are), got married and continue to live very happily ever after,' he tweeted early last year.

"I love my husband. He is funny, he is kind, he is patient, he loves my cooking. He's just a really great guy," Harris told NowThis in an interview last year.

During the election campaign, Harris has repeatedly said that she loves being 'Momala' to her step-children, who came up with the term as they preferred it over 'stepmom'.

"To my brother and me, you'll always be 'Momala', the world's greatest stepmom," Ella said in a video introducing Harris at the Democratic National Convention.

"You're a rock, not just for our dad, but for three generations of our big, blended family."

"My family means everything to me. And I've had a lot of titles over my career, and certainly, 'Vice President' will be great, but 'Momala' will always be the one that means the most," Harris had said in her first speech after Biden chose her to run with him for the White House.

USA Today said in a report that Emhoff has handled high-profile cases involving production companies, a former NFL athlete and a sports nutrition company, among others.

Born in Brooklyn, New York, he moved with his family to Southern California from New Jersey as a teenager.

He graduated from California State University at Northridge in 1987 and went on to USC's Gould School of Law where he got his law degree in 1990.

The USA Today report added that during a 'Lawyers for Biden' event, Emhoff had said that he would focus on 'access to justice' as an issue while he's second gentleman.