Harnaaz Sandhu speaks out on hijab: Let her live the way she wants to

Days after her remarks on hijab made headlines, Miss Universe 2021 Harnaaz Sandhu on Wednesday said as a youth of the country she simply shared her perspective when asked to comment on the issue. 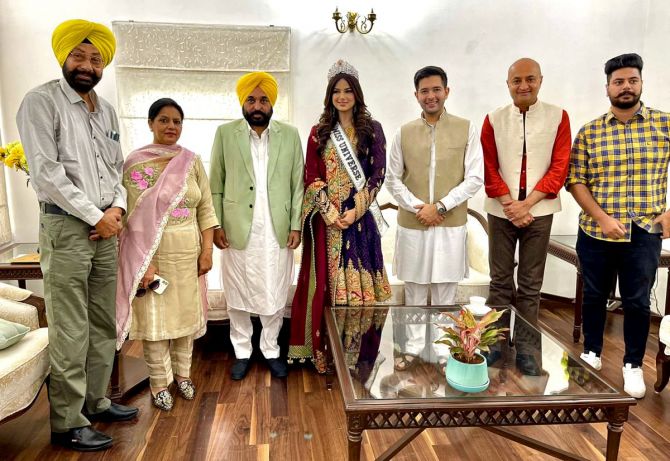 The 24-year-old, who won the coveted pageant earlier this year, said the matter in question was something she felt she "needed" to address because she believes in letting one live the way they choose to.

"Being the youth of my country... I'm a student of masters in public administration, it's important to have your perspective about anything that's happening around the world," Sandhu said at an event in Chandigarh.

A clip of the model-actor went viral on social media last week in which a reporter can be seen asking Sandhu about her views on hijab. The video was part of an event held in Mumbai on March 17 in honour of the Miss Universe 2021’s homecoming.

In her response, she had appealed to society to stop targeting girls, including on the issue of hijab, saying, "Let them live the way they choose to."

On Wednesday, Sandhu reiterated her views, adding after she spoke out people started suggesting that she was "supporting" the practice of hijab.

"I think I just gave my perspective to it. And at the end of the day, that girl is dominated by the patriarchy system or if that girl is wearing a hijab, that's her choice. Even if she's getting dominated, she needs to come and speak.

Sandhu also spoke about being body-shamed on social media as she revealed that she has celiac disease, an immune reaction to eating gluten, a protein found in wheat, barley and rye.

"I'm one of those individuals who was first bullied that 'she's too skinny' and now they bully me saying 'she's fat'. Nobody knows about my celiac disease. That I can't eat wheat flour and many other things," she said.

Sandhu, who has been globetrotting as part of her duties as the spokesperson of the Miss Universe Organization, said one's body undergoes a lot of changes when they live across different cities.

"When you go to a village, you see changes in your body. And I went to New York for the very first time... It is a whole other world altogether."

The model said the noise around her body image doesn't hold any importance for her.

"And if I am going through that... I know there are a lot of people who are trolling me and it's okay because that's their mindset, their stigmas, but there are a lot of other individuals who are trolled every day irrespective of their Miss Universe or not. I'm empowering them by making them feel that if I feel gorgeous, you are beautiful too," she said.

It's in our minds how we perceive beauty, Sandhu said.

"For me everyone is beautiful. It's about how you represent yourself and what kind of ideology you have. Your features do not matter at one moment. If you think that I'm the most beautiful girl that's why I won Miss Universe, I'm sorry, you're wrong.

"I might not be the most beautiful (girl) but I might be the one of the courageous and confident girls who believes even if I'm fat, even if I'm thin, it's my body, I love myself. I love the changes and you should appreciate it because not everyone can go through the changes. So be happy if you're going through changes. If you are facing challenges in life, you should be thankful because that means something good is going to happen."

Later, while responding to a question during her interaction with reporters, she said drug menace in the state, women’s empowerment, and other issues were discussed during the meeting with the chief minister.

She said she wants to do a lot for her home state Punjab.

"I am really looking forward to how I can support (the state). It was a beautiful and informative meeting," she said about the meeting with Mann during which Aam Aadmi Party senior leader Raghav Chadha and Sandhu's family were also present.

Earlier in the day, the government of Punjab shared a tweet about Sandhu's meeting with the chief minister.

"Miss Universe @HarnaazKaur  Sandhu called on CM @BhagwantMann  today at his official residence. The Chief Minister congratulated her for making the country proud by bringing the title of Miss Universe back to India after 21 years," said a tweet by the Punjab government.

Talking about her journey to winning the Miss Universe 2021 pageant at the event, Sandhu said it was difficult for her to put the experience of winning the coveted crown after 21 years for the country into words. She also thanked her family for being her constant pillar of support.

Asked for her comments on The Kashmir Files, Sandhu said she has heard a lot about the film but has yet to watch it owing to her busy schedule.