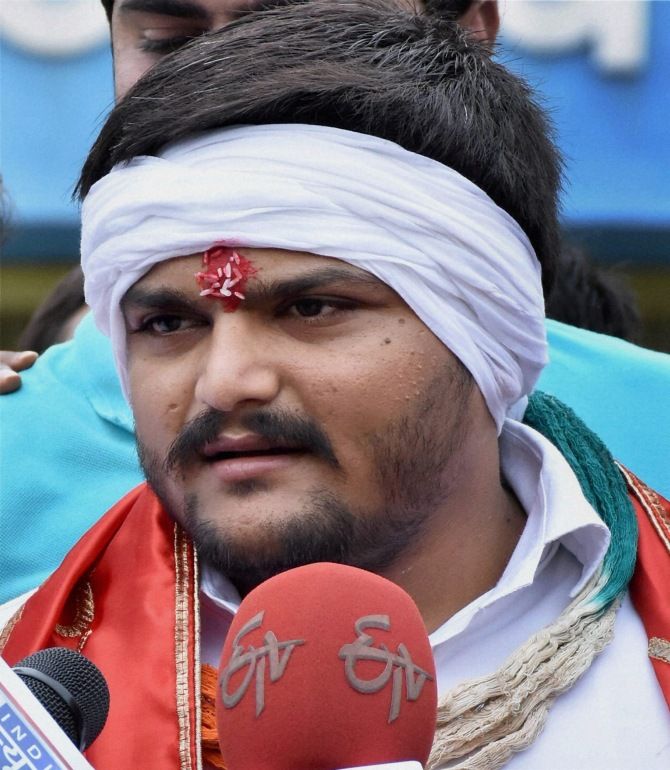 Days after two of his former associates accused him of using the Patidar quota agitation as a "tool to nurture his leadership ambition", Hardik Patel on Wednesday hit back saying his detractors were "playing into the hands of some in the Bharatiya Janata Party government in Gujarat who were trying to weaken the protest" by maligning his image.

Seeking to counter his rivals, Hardik's Patidar Anamat Andolan Samiti, the outfit leading the agitation for OBC status for the community and reservation in jobs and education, has called a special meeting on August 29 at Udaipur where he has moved after being granted bail by the Gujarat high court.

Two days ago, two of his former close aides -- Chirag and Ketan Patel -- had levelled allegations against Hardik in an open letter which hinted at cracks in his outfit.

In the letter, they had alleged that 23-year-old Hardik "used" the agitation as a "tool to satisfy his ambition to emerge as a leader and a 'crorepati' (millionaire) within a year of launching it.

Reacting to the allegations, Hardik told PTI that Chirag and Ketan were levelling "false allegations at the behest of the BJP government in the state".

"I strongly believe that both Chirag and Ketan are playing into the hands of some people in the state government who are trying to weaken the protest by maligning my image. But, they will not succeed as the people know that I am clean. The Patel community knows who I am," he said.

"There is no need to offer an explanation to these allegations as I know that I am not at fault. This is not new to me. Even when I was in jail, certain elements had tried to malign my image by claiming that I had amassed Rs 80 lakh through the agitation. In the end, I came out clean," he added.

Hardik has moved to Udaipur in Rajasthan after being granted bail by the high court last month in two sedition cases lodged against him at Ahmedabad and Surat. One of the conditions of bail was he would stay outside Gujarat for the next six months.

Hardik was in jail for almost nine months. Along with him, Chirag and Ketan were also behind bars for almost eight months as they too were named as accused by Ahmedabad police in one of the sedition cases following large-scale violence in Gujarat after a mega PAAS rally in the city on August 25, 2015.

The PAAS has called a meeting of all its key conveners at Udaipur to give a "fitting reply" to the allegations levelled by the duo, said Hardik's close aide Dinesh Bambhaniya who too is an accused in the case.

"The letter was a part of a political conspiracy against Hardik and PAAS. Instead of working for the cause, both of them (Chirag and Ketan) want to become leaders. We will not tolerate such elements. We have called a meeting at Udaipur on August 29 to clear the air surrounding the issue," said Bambhaniya who once worked closely with Ketan.

In the letter, Chirag and Ketan had also accused Hardik of a "dictatorial style of working" which they said had ruined the chances of securing reservation for Patels.