Har Ghar Tiranga: Disposal of flags a matter of concern

With 'Har Ghar Tiranga' campaign picking pace, Residents Welfare Association in the national capital are concerned about the disposal of these flags in a dignified manner after the celebrations. RWAs across the city are brainstorming ideas to avoid disrespect for the national flag. They are running social media awareness campaigns about the rules to be followed. Some of them will also launch campaigns for collection of flags from households and their respectful disposal.

The 'Har Ghar Tiranga' campaign under the aegis of 'Azadi Ka Amrit Mahotsav' kicked off on Saturday. The Union government has urged people to hoist or display tricolours in their houses from August 13 to 15 to mark the 75th anniversary of India's independence.

Taking cognisance of the disposal of flags, the Municipal Corporation of Delhi said it has given special instructions to its Safai Sainiks to collect dishevelled or soiled flags separately.

"MCD attaches huge importance and dignity to the national flag. In pursuance to this, it has given special instructions to its Safai Sainiks to collect dishevelled or soiled flags separately and deposit them in their respective zonal control room," MCD director (Press and Information) Amit Kumar told PTI.

"These flags will then be disposed with all dignity and respect as per the prescriptions laid down in the Flag Code," he added.

According to the Flag Code, 2002, a damaged or soiled flag shall shall be destroyed as a whole in private, preferably by burning or any other method consistent with its dignity.

Atul Goyal, who heads the United Residents Joint Action, a civil society initiative of 2,500 residents' welfare associations, said lakhs of flags will be used this Independence Day and they should be disposed appropriately.

"We dont want flags to be lying in dustbins or on roads. It is our pride and should be given the respect it deserves. The major challenge on authorities and us is to ensure that the flags are disposed correctly," he said.

Goyal said URJA has issued a circular to all RWAs members to collect flags from their area and deposit them at a designated place. "URJA will then dispose the flags and ensure there is no disrespect," he said.

"To avoid any disrespect to the flag, we are running a social media campaign and informing people about the rules to be followed. After the celebration, we will also visit the localities and ensure there are no flags lying on roads," he said. 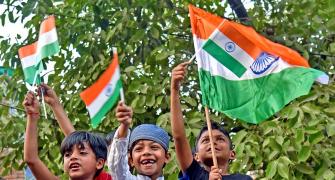 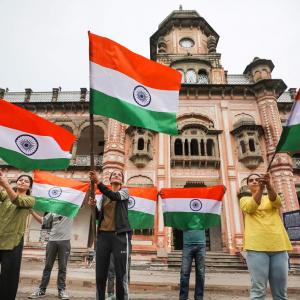