Source: PTI
June 05, 2012 19:04 IST
The Vishwa Hindu Parishad on Tuesday asked Art of Living founder and Shri Amarnath Shrine Board member, Sri Sri Ravishankar, to keep away from the "boiling issue" of curtailment of Amarnath yatra, saying otherwise he will "burn his hands".

Reacting strongly to the statement made by the Art of Living founder, VHP spokesperson Surinder Jain said his organisation did not want to drag Ravishankar into this issue but he himself had waded into it.

"I just want to say to him that don't play with fire, otherwise you will burn your hands," Jain said.

Ravishankar had earlier in a statement said 'there was no pressure from any individual or organisation on us. It was purely a logistical challenge to ensure the safety of the yatris.'

'We had a detailed discussion in which the state government and the Army presented the weather conditions and the time it takes to clear the path.

'Only after taking serious consideration of logistics, weather conditions and the preparedness to host thousands of yatris it was decided to commence the yatra towards the end of June this year,' he had said

The VHP has been demanding that the yatra start from Jayeshth Purnima (from June 4) and allowed to run for two months. 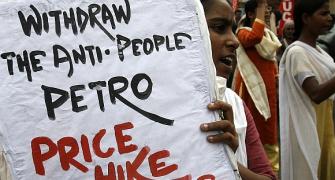