India had offered to evacuate Pakistanis from Wuhan: MEA

The government on Friday said it had offered to bring back people belonging to neighbouring countries, including Pakistan, from the novel coronavirus-hit Wuhan where 80 Indian students are still remaining after evacuation of 647 Indians and seven Maldivians. IMAGE: Maldivian nationals who were brought along with Indians by an Air India aircraft from Wuhan. Photograph: ANI

On February 1, 324 Indians were brought back from Wuhan by first Air India special flight, while another batch of 323 Indians and seven Maldivians were evacuated from the Chinese city on February 2 through a second special flight.

External Affairs Minister S Jaishankar informed Rajya Sabha that the time when the two flights were going, India had told all students and larger community in Wuhan that it was prepared not only to bring back Indians but also all the people of our neighbouring countries who want to come back.

"So, this was an offer which was made to all our neighbours. And, of these, the seven nationals of Maldives chose to avail the offer.

"But I would like the honourable members to know that the offer was made to everybody," he informed Rajya Sabha in response to queries if Pakistan had requested India to bring back its citizens.

Jaishankar further said there are about 80 Indian students who are still in the coronavirus-hit Chinese city of Wuhan. This includes 10 students who had come to the airport when the flights were sent. But they were running fever and so the Chinese authorities, after screening, did not allow them to board the flight.

"About 70 odd people chose voluntarily to stay in Wuhan and not get evacuated in the two flights," the minister said.

Meanwhile, India has cancelled all visas issued to foreign nationals coming from China as it stepped up efforts to combat the spread of novel coronavirus after 150 passengers were identified with symptoms of the deadly virus and sent to isolation units.

Making a suo motu statement in Rajya Sabha, health minister Harsh Vardhan said the government has asked people not to travel to China - the epicentre of the deadly virus, and will mandatorily quarantine anyone returning from China.

Screening of passengers has been stepped up at 21 airports as well as 12 major seaports and all minor ports. Also, screening is being done at all integrated check posts on the Nepal border after the Himalayan nation reported a confirmed case.

While the Cabinet Secretary is taking daily reviews with all related ministries, a Group of Ministers comprising the Cabinet Ministers for External Affairs and Civil Aviation and the Ministers of State for Home, Shipping and Health and Family Welfare
has been constituted to monitor the situation.

"As of today, a total of 1,275 flights have been screened covering a total of 1,39,539 passengers, and 150 passengers identified with symptoms have been referred to isolation facilities," the health minister said.

Detailing steps taken to check the spread of coronavirus, Vardhan said the first advisory was issued on January 17 and the travel advisories are accordingly getting revised as situation evolves.

"Presently, existing visas (including eVisa already issued) are no longer valid for any foreign national travelling from China. People have already been advised to refrain from travelling to China through an earlier advisory. People travelling to China henceforth will be quarantined on return," he said.

"People having compelling reasons to visit India are asked to contact the Indian embassy in Beijing or consulate in Shanghai or Guangzhou," the minister added.

Vardhan informed that the screening of passengers has been done since January 18.

"Initially airports at Delhi, Mumbai, Chennai, Kolkata, Bengaluru , Hyderabad and Kochi were covered and subsequently expanded to a total of 21 airports. Universal thermal screening has been made mandatory for all flights from Singapore and Thailand besides Hong Kong and China and these flights will park at earmarked aero-bridges to facilitate screening," he added.

Signages have been displayed at prominent places in airports and ports, in-flight announcements are being made and self-declaration forms are being filled up by all passengers.

Stating that three positive cases have been reported so far in India, all from Kerala, Vardhan said, "All these cases have a travel history from Wuhan, China. They have been isolated and are reported to be clinically stable."

Besides screening incoming passengers, India has evacuated 647 Indians and 7 Maldivian nationals from China.

"After the evacuation, the people are presently undergoing quarantine at special facilities created by the Indian Army in Manesar and by Indo Tibetan Border Police (ITBP) in Chawla Camp," he said, adding 10 of the evacuees who were symptomatic have been shifted to isolation facilities.

All of them have tested negative and are stable, he added.

Vardhan asserted that the ever increasing magnitude of this outbreak calls for a concerted effort by not only health ministry but all sectors of government.

He said screening of passengers has been initiated in 12 major seaports and all minor ports in the country to identify passengers & crew coming from China and to isolate them in case they are found symptomatic.

With reports of a confirmed case in Nepal, Vardhan said the Indian government has initiated screening in all integrated check posts from Nepal.

"Regular surveillance has been initiated across the country for all cases having travel history from China and for people having contact with such persons and having fever, cough or breathlessness. Through Integrated Disease Surveillance network all such persons are tracked and presently we are following 6,599 passengers across 29 States/UTs in the community," Vardhan said, adding that 305 symptomatic travellers have been referred to isolation facility and are being monitored.

Vardhan said China on December 31 reported an outbreak of coronavirus that was initially noticed in seafood market in Wuhan city in Hubei province in early December and spread to all provinces of China.

The government on Friday directed all 12 major ports to immediately put in place screening, detection and quarantine system for disembarking seafarers and cruise passengers to prevent the novel coronavirus even as officials said the situation was under control in the country and was being regularly monitored, including by the Prime Minister's Office.

A detailed statement regarding the situation and measures taken to check the spread of the deadly novel coronavirus (nCoV) was made by Union Health Minister Harsh Vardhan in Rajya Sabha.

Meanwhile, Jaishankar tweeted that many Indian crew and some Indian passengers on-board the cruise ship Diamond Princess were quarantined off Japan due to the coronavirus.

"None have tested positive, as per the latest information provided by our Embassy (in Tokyo). We are closely following the developments," he said.

As the coronavirus continued to spread at an alarming pace in China with official death toll of 637 and confirmed cases of the infection over 31,000, India stepped up its efforts to detect and check the virus, which originated in Chinese city of Wuhan.

All the 12 major ports in the country were directed by the shipping ministry to "place a screening, detection and quarantine system immediately for disembarking Seafarers or Cruise Passengers", an official release said.

These ports were also instructed to procure N-95 masks as well as thermal scanners to screen passengers, besides obtaining self-declaration from arriving crews/passengers, it said.

In a detailed update, Union health secretary Preeti Sudan in a statement said as many as 1,39,539 passengers from 1275 flights have been screened for a possible exposure to the virus so far at the 21 identified airports.

"No new case has been detected in the country... The situation is under control and is being regularly monitored by the PMO, the health minister and the cabinet secretary on a daily basis for updates, status of preparedness and action taken so far," the statement said.

India so far has reported three confirmed cases of nCoV from Kerala. All three were medical students studying at the Wuhan University and had returned on their own recently. They self-reported at a hospital in the state and were tested positive for the respiratory virus.

As of now 1232 samples have been tested and 1199 samples were found negative apart from the three positive samples from Kerala, it said, adding 30 samples were under process of testing.

The statement also said 6,599 persons were presently under community surveillance in 29 states and UTs while 128 were admitted to isolation wards at various hospitals across the country.

All 647 people evacuated from China's Wuhan city who were lodged at the quarantine facilities set up by the security forces in and around Delhi, and had tested negative for nCoV will be re-tested on day 14 of the quarantine period, it added.

Sudan on Friday chaired a video conference with health secretaries from states and UTs along with senior officials from several ministries -- shipping, external affairs, civil aviation, tourism and home affairs -- to review their preparedness for the
prevention and management of nCoV.

Shringla conveyed India's appreciation to China for facilitating evacuation of Indians from the coronavirus-hit Wuhan city. 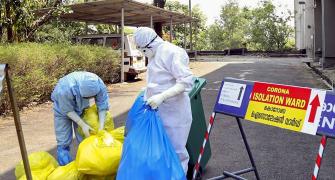