Amid criticism over his cabinet colleague Navjot Singh Sidhu's visit to Pakistan for the inauguration of the Kartarpur Sahib corridor, Punjab Chief Minister Amarinder Singh said on Tuesday that he had asked him to reconsider it. 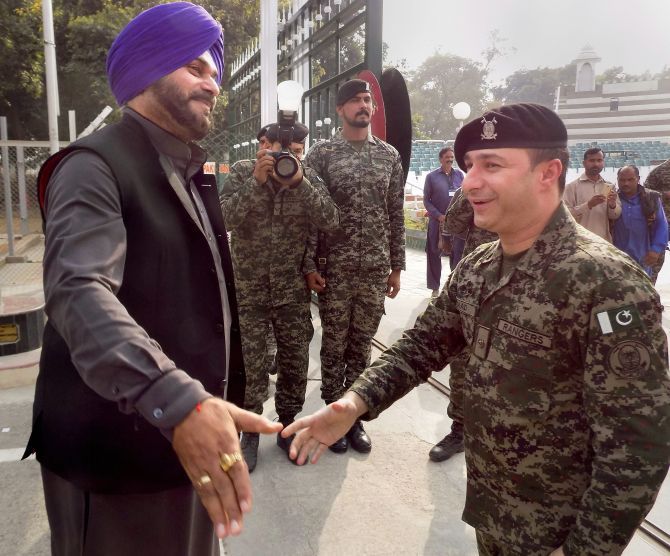 IMAGE: Pakistan Rangers personnel greet Punjab tourism minister Navjot Singh Sidhu as he crosses over to Pakistan through the Wagah border to attend the groundbreaking ceremony of the Kartarpur Corridor at Nankana Sahib. Photograph: PTI Photo

But Amarinder said he acceded to Sidhu's request for permission as he did not believe in stopping anyone from undertaking a "personal visit".

The chief minister said Sidhu was campaigning in Madhya Pradesh when he told him to reconsider his decision.

“Sidhu told me he had already committed himself to going. When I informed him of the stand I had taken on the issue, he said it was his personal visit but he would get back to me. But I did not hear from him,” Amarinder said.

He added the cabinet minister had sent him a request for going and he approved it.

"I do not stop anyone from going anywhere on a private visit. It is not an official visit," said the CM.

Notably, Sidhu on Tuesday crossed over to Pakistan through Attari-Wagah border to take part in the ground-breaking ceremony on Wednesday.

Reiterating his stand of not going to Pakistan himself for ground breaking ceremony of the corridor there on Wednesday, Amarinder said in a statement how could he go there when innocent Indian citizens and soldiers were being killed everyday.

"I have strong feelings on the issue. I have a strong bond with the Army and cannot stand seeing my people killed," he asserted.

Amarinder had earlier declined Pakistan Foreign Minister Shah Mehmood Qureshi's invitation to attend the foundation stone laying for the Kartarpur Corridor on the other side of the border, citing continued terrorist attacks in Punjab and killings of Indian soldiers by Pakistan armed forces.

The Congress, he said, had always stood against terrorism, and would never allow anyone to destroy the peace of the country or its people.

Terming the situation in Pakistan as “very uncertain and fluid”, Amarinder said nobody knew who was running the government there or what was happening in that country.

"If Imran Khan (Pakistan Prime Minister) is running the government then he should rein in (the Pak army and the terrorist groups). If he cannot do that then he obviously has nothing in his hands,” said the Chief Minister.

“My message is very clear – don't mess with Punjab,” asserted Amarinder, reiterating his warning to Pakistan against any attempt to disrupt India's peace.

Vowing not to allow terrorism to return to Punjab at any cost, the Chief Minister said the times had changed now.

In those times, Punjab then had a police force of less than 20,000, but now has 81,000 police personnel to keep it safe and protected, said the CM.

"However, if things do get out of hand, then there is the Indian Army, which is well equipped and prepared to counter any threat," said Amarinder, adding the Army will not allow them (Pakistan) to create trouble in the country.

On the issue of the Kartarpur corridor, the Chief Minister said every Punjabi was very happy with it and there was no question of it being used by terrorists to infiltrate into India.

"No one need worry about that as there would be high level of security at the corridor," he added.

Stating that the issue of the corridor was raised by former prime minister Manmohan Singh on the 400th anniversary of installation of holy Guru Granth Sahib and he himself had raised the issue with Pakistani leaders Parvez Musharraf and Parvez Elahi, Amarinder said he was completely in favour of the corridor as he wanted peace, backed by increase in trade, with Pakistan.

"It was the killing of innocent Indians and Indian soldiers that he could not tolerate," said the CM, recalling that Kargil had happened during peace talks with the then Prime Minister Atal Bihari Vajpayee.

He warned that Pakistan could not be trusted in the current circumstances.

Asked about the 'Referendum 2020' (campaign for a separate Sikh state), the chief minister said the 'Sikhs For Justice' legal advisor G S Pannun was just a "stooge" of the Pakistan's ISI as the organisation was being funded and managed by the ISI.

"It has no takers in India and is being propagated by a handful of anti-socials," he added.

Amarinder also criticised Akali leader and Union Minister Harsimrat Kaur Badal for raking up the 1984 anti-Sikh riots issue on the historic occasion of the foundation stone laying of Kartarpur corridor at Dera Baba Nanak in Gurdaspur district on Monday.

He said, "The Akalis were in the habit of exploiting religion for political gains. But the people of Punjab were no longer willing to be misled by their propaganda.”

The chief minister also said the Congress MLAs were rightly aggrieved about the Badals' names being on the foundation stone plaque. The Government of India is making the road and protocol prohibited the inclusion of their names, he stressed.

Meanwhile, Sidhu, who arrived in Pakistan along with a group of Indian journalists to take part in the groundbreaking ceremony of the Kartarpur Corridor in Narowal, some 120 kms from Lahore, said that the corridor would promote peace and erase "enmity" between India and Pakistan and create infinite possibilities between them, including the resumption of cricket ties.

The 4-km-long corridor will connect Dera Baba Nanak in India's Gurdaspur district with Gurdwara Kartarpur Sahib Narowal in Pakistan. The corridor will provide visa-free access to the Indian Sikh pilgrims to the gurdwara.

Prime Minister Imran Khan will perform the groundbreaking of the corridor on Wednesday.

Sidhu thanked Khan for making this corridor possible which he said will help promote peace between the two countries.

"This will erase enmity between the two nations," he said.

"The seed Imran Khan had sown three months ago has become a plant. It is a happy moment for the Sikh community that the corridor to reach Kartarpur to get Baba Guru Nanak's blessing without any hassle," he told the media.

He said the wait of 71 years is over after the opening of the corridor.

"The Karturpur Corridor will prove to be a path of peace,” Sidhu added.

He termed it as a "corridor of infinite possibilities" and said through such initiatives, peace would be promoted (between the two countries).

"There are numerous artistes and cricketers in both the countries whom everyone loves and there need to be cricket matches between India and Pakistan," he said.

The former cricketer said the Katarpur Corridor would create infinite possibilities between the two neighbours including the resumption of cricket ties.

"I want to avoid conflicts – religion should not been seen through the lens of politics. There is no rule in the world that prevents religious devotees to visit places of worship," the former Indian cricketer-turned-politician said.

"I congratulate Pakistan and India for providing the facility to Sikhs after 71 years," he said.

Responding to a question regarding criticism of his decision to visit Pakistan in August to attend the oath-taking ceremony of Imran Khan, Sidhu said, "I forgive those who criticised me."

"I have been a fan of Imran Khan since I was a child," Sidhu said as he joked and recited verses in Punjabi.

"There are many fans of Imran, Wasim Akram and Javed Miandad in India, similarly in Pakistan Shah Rukh and Salman Khan have a huge fan following."

Kartarpur is located in Shakargarh in Narowal district of Pakistan's Punjab province. It is said that Guru Nanak Dev, the founder of Sikhism, had spent more than 18 years of his life there. The Kartarpur Sahib Gurdwara is located on the banks of the Ravi River, about three-four kilometres from the border in Pakistan.