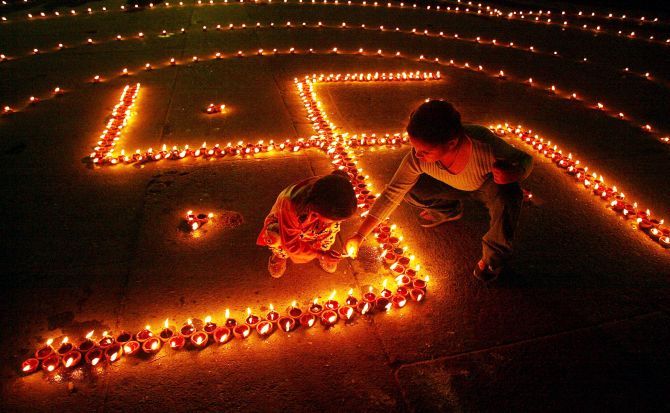 Following outcry from several groups, a prestigious American university has decided to rescind its suspension order against a student who displayed a Hindu swastika on his residence hall's bulletin board.

The Hindu American Foundation welcomed the move to rescind the interim suspension order by the GeorgeWashingtonUniversity.

HAF Associate Director of Public Policy Harsh Voruganti said that the decision reflects the facts of this case and the efforts by Hindu organisations to educate campus officials about the sacredness of the Indian swastika.

The small, bronze, swastika was displayed by the student on March 16 on a bulletin board at GWU's international house residence hall, and mistaken by another student for a Nazi swastika -- a distinct symbol used by the German Nazi party and other hate groups.

The student intended to educate his friends and co-residents about the symbol's origins, which he learned about during a spring break trip to India.

Although the law enforcement authorities had found no violation, the university proceeded with disciplinary actions against him, with the possibility of expulsion.

A number of Hindu, interfaith, and Jewish groups wrote to University President Steven Knapp, educating him about the significance of the swastika for Hindus, Buddhists, and Jains, and urging him to avoid expelling the student.

“The swastika is one of the most sacred symbols of Hinduism, with a three thousand year history of peace before it was misappropriated by the Nazis,” said Samir Kalra, HAF senior director and Human Rights Fellow.

“We wanted to ensure that any Hindu, Buddhist, or Jain student who sought to display the symbol as a part of her faith would not be punished for doing so,” Kalra said.