Gurjar leader Vijay Singh Bainsla has threatened to oppose Rahul Gandhi's 'Bharat Jodo Yatra' in Rajasthan unless his demand to make Sachin Pilot, a prominent face from the community, the chief minister is accepted. 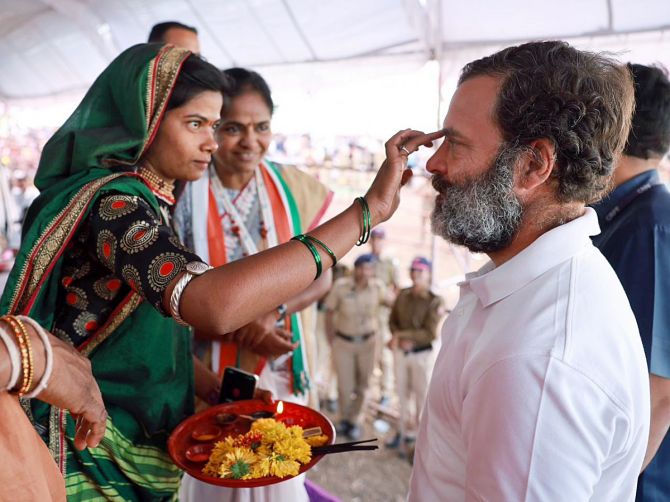 He said leaders of the Gurjar Arakshan Sangharh Samiti will be on the ground from Wednesday to make preparations for stopping the yatra.

"The current Congress government has completed four years and one year is left. Now Sachin Pilot should be made the chief minister. If this happens, then you (Rahul Gandhi) are welcome. We will oppose otherwise," he said on Monday night.

The Gurjar community constitutes five to six per cent of the state's population and is influential in over 40 seats, mainly in eastern Rajasthan. This region includes the districts from where the yatra is scheduled to pass.

In a video statement after a meeting with community members, he said Gandhi should visit Rajasthan "either with a Gurjar chief minister or with a reply over the issue".

He said the community had voted for the Congress in 2018 with the hope that a Gurjar will be made the chief minister.

"We did not vote for an MLA, we voted for a Gurjar CM," he said.

Bainsla also accused the Congress government of not fulfilling the promises made to the community.

"We had agreements with the government in 2019 and 2020 over several issues but the agreement is not being executed. It is not that we are threatening to stop the yatra but it is the Rajasthan government which is compelling us to take this move by not fulfilling our demands," he said.

Earlier, too, Bainsla had threatened to stop the yatra. In response, Pradesh Congress Committee chief Govind Singh Dotasra had then said no one had the courage to stop the yatra in the state.

The Bharat Jodo Yatra will enter from Jhalawar tentatively on December 3 and will cover parts of Jhalawar, Kota, Bundi, Sawaimadhopur, Dausa and Alwar in 20 days.

Prior to her, Forest Minister Hemaram Chaudhary had said in Barmer that a new face should be given a chance in the times to come.

He also claimed that Pilot had played an important role in reviving the Congress in the state and it came to power in 2018.