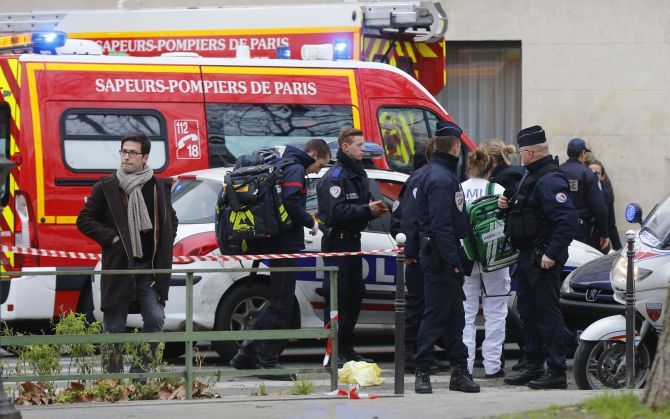 A view shows policemen and rescue members at the scene after a shooting at the Paris offices of Charlie Hebdo, a satirical newspaper. Photograph: Jacky Naegelen/Reuters

The gunmen, who wore hoods and were armed with Kalashnikov automatic rifles, exchanged gunfire with police at the scene, killing two officers. Police launched a massive hunt for the masked attackers who sped off in a car after shooting at officers. A video grab of the two armed attackers.

Some of the best-known cartoonists in France were among the 12 killed in the deadliest attack in France in four decades. Editor-in-chief Stephane Charbonnier, known as Charb, and the cartoonists known as Cabu (Jean Cabu), Tignous (Bernard 'Tignous' Verlhac) and Wolinski (George Wolinski) were killed in the attack on the paper, which gained notoriety for repeatedly publishing caricatures of the Prophet Mohammed, said media reports.

The newspaper had published a new cartoon on Twitter only hours before the attack that appeared to show Islamic State leader Abu Bakr al-Baghdadi.

Media reports said the attackers were heard shouting "Allahu Akbar," and the "prophet was avenged." General view of the street where police and fire fighters work in front of the Paris offices of Charlie Hebdo. Photographer: Philippe Wojazer/Reuters

A police spokesman, said the three armed men, wearing masks, had forced their way into the offices of Charlie Hebdo and had fired indiscriminately at people in the lobby, hitting many. He said that they were carrying AK-47 weapons, and that the attack had lasted several minutes before the attackers fled by car.

The police said that an abandoned car used by the gunmen had been discovered by police in the 20th Arrondissement of Paris, a neighborhood with a large immigrant population. Firefighters carry a victim on a stretcher at the scene after a shooting at the Paris offices of Charlie Hebdo. Photograph: Jacky Naegelen/Reuters.

There will be reinforced security at media company offices, major stores, religious centres and on public transport. All available forces have been mobilised, with civil and military reinforcements as part of this plan. President Francois Hollande, who rushed to the scene of the shooting, described it as a barbaric terrorist attack. "This is a terrorist attack, there is no doubt about this," he said. 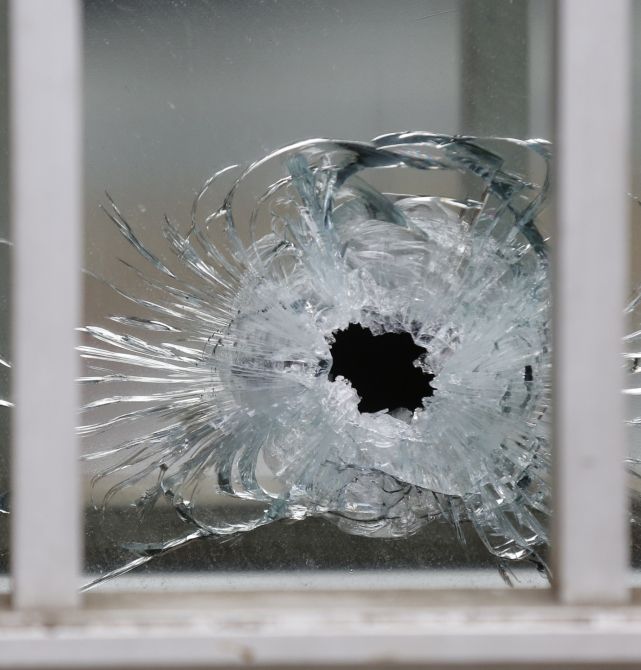 A bullet's impact is seen on a window at the scene after a shooting at the Paris offices of Charlie Hebdo. Photograph: Jacky Naegelen/Reuters.

"An act of exceptional barbarism has just been committed here in Paris against a newspaper, meaning (against) the expression of liberty," Hollande said.

Hollande called for "national unity", adding that "several terrorist attacks had been foiled in recent weeks".

The Danish newspaper that caused a global stir with a series of controversial cartoons of the Prophet Mohammed stepped up security after the deadly attack in Paris.

US President Barack Obama condemned the horrific terror attack in France and directed his officials to provide any assistance needed to help bring these terrorists to justice.

"I strongly condemn the horrific shooting at the offices of Charlie Hebdo magazine in Paris that has reportedly killed 12 people. Our thoughts and prayers are with the victims of this terrorist attack and the people of France at this difficult time," Obama said in a statement. The satirical magazine's premises have been under long-running police surveillance because of a potential threat from Islamist extremists. In 2011, Charlie Hebdo's offices were firebombed, its website hacked, its Facebook page suspended for 24 hours and its staff targeted with death threats.'

France's Muslim leadership sharply condemned the shooting calling it a "barbaric" attack and an assault on press freedom and democracy.

The body represents France's Muslim community, which is Europe's biggest and estimated to number between 3.5 million and five million people. 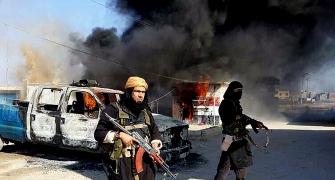 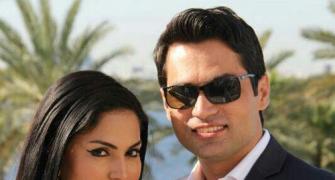 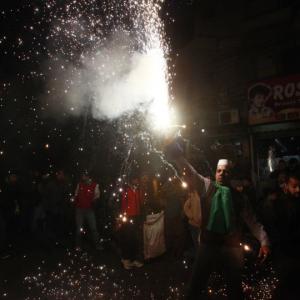 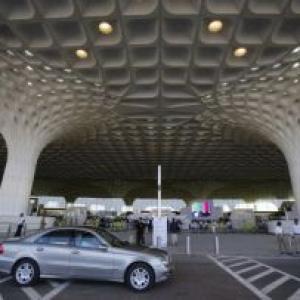