Amin left the Congress and joined the Bharatiya Janata Party in presence of Narendra Modi on Thursday.

Amin's supporters, including the Ahmedabad city Congress president Pankaj Shah, have already resigned from their posts. Similarly, two sitting MLAs revolted against the party and filed nominations as independent candidates on Friday.

Various protests against candidature announcements from all corners of the state has left Congress leaders baffled and they feel the ground is slipping from beneath their feet.

Minister of State for Parliamentary Affairs Rajiv Shukla on Saturday had met former Gujarat deputy CM Amin, who was denied nomination by the Congress for the upcoming state assembly polls.

Shukla assured him of taking up the matter with the Congress high command, but failed to stop the disgruntled leader from joining the BJP.

Following protests against the first list of 52 candidates for both phases of elections, the Congress did not release the list of remaining candidates, and instead started instructing candidates personally, issuing mandates secretively.

Major drama had unfolded at Amin's residence last week as hundreds of supporters rushed to meet him after the Congress high command did not grant his request to contest from the Gandhingar South constituency.

Amin's supporters had poured in from not just the city, but also from Kalol and Kheda. They not only sympathised with him, but even showed willingness to resign from their posts in the party as well as the municipal corporation, district and taluka panchayats, university and other organisations as representatives of the party.

After the party brass did not pay any heed to the protest of the workers, Ahmedabad City Congress president, 12 municipal corporators, 40 ward presidents, in-charges of 14 assembly constituencies and 100 other officials resigned from their posts.

Amin had earlier said he was upset by the party's decision, but made it clear that he did not wish to contest elections at all. However, later, he also said that he along with his supporters would not work for the party.

Gujarat will go to the polls in two phases on December 13 and 17. The counting of votes will take place on December 20. 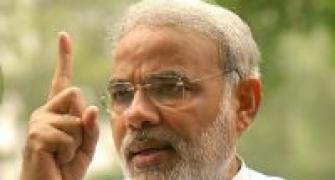 Soniaji has no knowledge about Gujarat, says Modi
New@Rediff: Our Sentimeter on who will win Gujarat
Complete coverage: Modi battles for Gujarat