The Gujarat police chief has ordered a probe into an incident where cops were caught on camera allegedly publicly flogging a few Muslim community members accused of hurling stones at garba dance participants in Kheda district, while a voluntary group has sent legal notices to the Chief Secretary and the Director General of Police over the issue. DGP Ashish Bhatia ordered the probe after videos of the flogging incident surfaced on social media and the authorities took cognisance of the widely circulated clips, officials said on Friday.

Kapadvanj Deputy Superintendent of Police V N Solanki has been asked to conduct the inquiry and submit a report.

"Late last night, I was given the responsibility of conducting the inquiry into the incident. I will submit my report as soon as possible," Solanki told PTI.

However, he declined to provide details about the policemen allegedly involved in the flogging incident earlier this week.

Seven persons, including a policeman, were injured after a mob comprising members of the Muslim community allegedly hurled stones at a garba dance event organised as part of Navratri celebrations at Undhela village of Kheda district on Monday night. The attackers objected to the event being organised near a mosque.

The next day, videos surfaced purportedly showing police personnel publicly flogging three of the 13 accused arrested in the stone pelting case with a baton by holding them against an electric pole at an intersection in Undhela village.

Of the 13 alleged attackers arrested for stone pelting, police had sought the remand of three. A court in Kheda on Wednesday sent them to two-day police remand, while 10 others were sent to jail under judicial custody.

According to the public prosecutor, two of the accused complained to the judge regarding the police action, following which the judge ordered their medical examination.

The viral video clips purportedly showed three men being brought out of a police van near the event venue on Tuesday before being taken towards an electric pole and held against it by a policeman, who pulled their hands. Another policeman can be seen hitting them below the waist with a baton.

The images showed the alleged attackers apologising to the people gathered at the spot with folded hands after policemen asked them to do so. People present in a large number at the site cheered the police action.

The sarpanch (head) of Undhela village had organised the garba dance event at a temple and a mob from the Muslim community tried to stop it since it was being held near a mosque, police had said earlier.

The temple and the mosque are located in close proximity.

Meanwhile, a voluntary organisation in Gujarat has sent legal notices to the Chief Secretary and the DGP over the flogging incident.

Through the legal notices dated Thursday (October 6), the MCC has urged the state government to take "appropriate and suitable departmental, disciplinary, punitive and criminal action against the erring police officials forthwith who have openly violated all rights of the victims by way of flogging".

Nafees said if no action was initiated, he will be constrained to initiate suitable legal action against the erring police officials and the respondents.

"Those who were flogged belong to the minority Muslim community. Despite the atrocity at the behest of the police personnel having been widely reported, no action has been taken/initiated till date in complete violation of all rights of those flogged," stated the identical legal notices, sent through lawyer Anand Yagnik.

"Such open and brazen violation is not only against the protected right under Article 21, but against the whole constitutional spirit of a civilized society," the organisation stated.

The alleged stone-pelting incident does not justify the flogging by police personnel to quell the 'hurt sentiments' of the majority population of the village, it said.

The police personnel responsible for the flogging incident are bound by the Code of Criminal Procedure and have no right to physically hit or intimidate anyone. There is no section in any police manual or the Indian Penal Code that allows police to indiscriminately assault citizens, the outfit said. 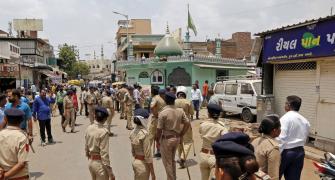 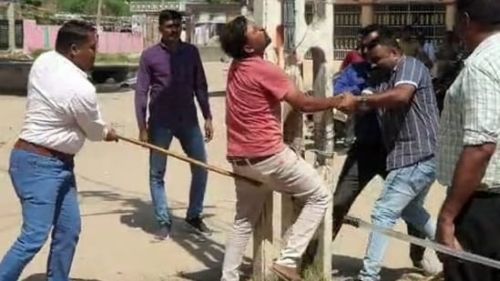