The Bharatiya Janata Party on Thursday inducted 24 members, including 21 who debuted as ministers, into the four-day-old Bhupendra Patel-led ministry, discarding all ministers in the previous Vijay Rupani-led regime in Prime Minister Narendra Modi's home state, a year ahead of the assembly polls. 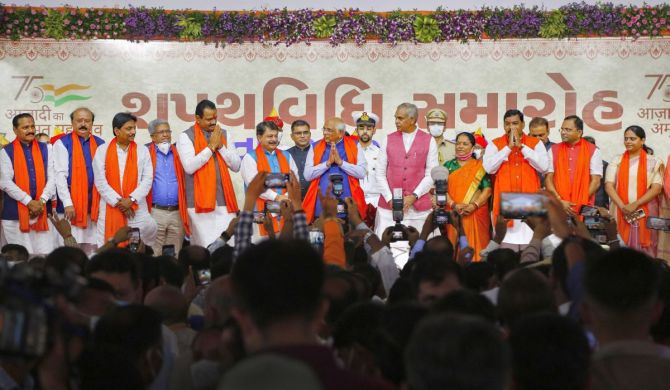 The new ministry doesn't have the post of deputy chief minister, held by Nitin Patel in the Rupani-led ministry.

While allocating portfolios to the newly-inducted ministers, Patel kept many departments, including Home, with himself.

Political observers say the BJP expects to make a significant impact ahead of the 2022 state polls with this new-look ministry.

The party is preparing to face the voters with a clean slate, they added.

With the fresh inductions, which include two women, the strength of the ministry led by Patel, a first-term MLA and minister, has gone up to 25.

“Congratulations to all Party colleagues who have taken oath as Ministers in the Gujarat Government. These are outstanding Karyakartas who have devoted their lives to public service and spreading our Party's development agenda. Best wishes for a fruitful tenure ahead,” Modi tweeted.

The ministry formation exercise shows that the party has tried to balance caste and regional representation.

After picking Patel, a Patidar community leader as the CM, the BJP has given berth to six Patidars and OBCs each, four from scheduled tribes, three from scheduled castes, two each from among Brahmins and Kshatriyas and one member from the Jain community.

Bhupendra Patel chaired the first meeting of the Council of Ministers, soon after the swearing-in ceremony.

A party source said there is widespread dissatisfaction over the dropping of senior ministers, who held key posts in the Rupani ministry.

“The ceremony was to be held on Wednesday but was postponed as some senior ministers were unhappy over being dropped,” the source said. Banners and hoardings put up at Raj Bhavan for Wednesday's ceremony had to be removed, he pointed out.

When reporters asked Nitin Patel about reports of rumblings in the BJP, he sounded philosophical.

"People come and go from the posts. Their supporters feel left out. But now it is not my responsibility. The party leadership has to look after it,” Patel said. "I want to congratulate the ministers, they will lead the party in the next election," he added.

Bhupendra Patel (59), who was sworn in as the 17th chief minister of the state on Monday, was present at the Raj Bhavan ceremony, along with Rupani, whose sudden resignation from the post on Saturday led to the formation of the new ministry.

Trivedi, Rana and Raghavji Patel have been ministers earlier.

Rajendra Trivedi was allocated Revenue, Law and Justice, and Legislative and Parliamentary Affairs departments, while Jitubhai Vaghani was given the Education portfolio. Rishikesh Patel has been made in charge of Health and Family Welfare, Medical Education and Water Resources and Water Supply.

Trivedi was nominated Assembly Speaker in 2018 after serving as the Minister of State for Sports, Youth and Cultural Activities and Pilgrimage in the Rupani government.

The 67-year lawyer won from the Raopura seat in Vadodara district for the second time in 2017. He has been associated with the BJP since its Jan Sangh days and, as a lawyer, handled cases related to the 2002 post-Godhra riots.

Ahead of the swearing-in, there were speculations that senior ministers in the Rupani ministry, like Nitin Patel, Bhupendrasinh Chudasama, Kaushik Patel, Pradeepsinh Jadeja, and R C Faldu may not be included.

The BJP took the “no-repeat” formula a step further by not inducting any member of the Rupani ministry.

Bhupendra Patel's elevation - he is the first from the Patidar sub-group to be a chief minister - is key to BJP's plans to woo the Kadva Patidar community, which some political observers feel, has drifted away from the party.

Making him the CM is being seen as an attempt by the BJP to woo the Patidars ahead of the 2022 polls and retain the grip on Gujarat, which is under its rule for over two decades.

Meanwhile, Union Home Minister Amit Shah credited the BJP governments in Gujarat, right from the time when Modi was the chief minister, for strengthening the law and order situation and helping the state shed its 'curfew capital' tag and gain the identity of being a safe and secure state.

Addressing a gathering virtually on Thursday after inaugurating six newly-constructed police stations and an office of deputy superintendent of police in rural Ahmedabad, he said that thanks to the improved law and order situation, Gujarat has become a leading state in terms of industrial development.