The Bharatiya Janata Party on Tuesday swept elections to six municipal corporations in Gujarat by winning 483 out of 576 seats. 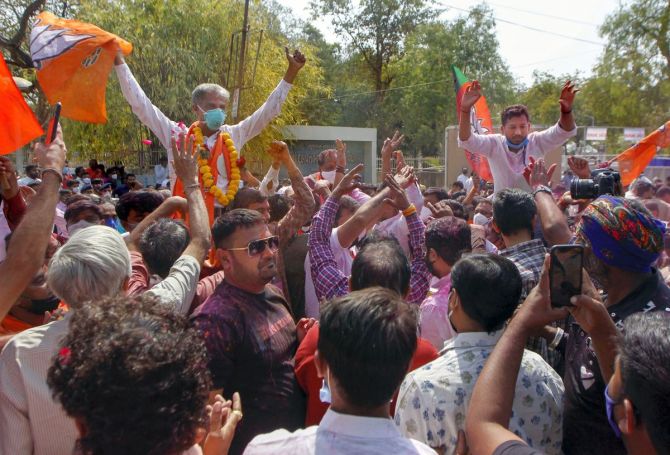 The ruling party retained power in all the six municipal corporations in the state -- Ahmedabad, Surat, Vadodara, Rajkot, Jamnagar and Bhavnagar.

The polls had been held on February 21.

The main opposition Congress got a drubbing, as it won only 55 seats and failed even to open account in Surat.

On the other hand, the Aam Aadmi Party put up an impressive show by winning 27 seats, all in Surat, and emerged as the main opposition in the Surat Municipal Corporation.

The AAP had for the first time fielded 470 candidates across all the six corporations.

The Congress, on the other hand, won seats in single digit in three corporations, and drew a blank in Surat.

The party won 25 seats in Ahmedabad, four in Rajkot, 11 in Jamnagar, eight in Bhavnagar and seven in Vadodara.

Three candidates of the Bahujan Samaj Party won in Jamnagar, while an independent candidate won only in Ahmedabad.

The BJP had won 389 seats and Congress 176 across these six municipal corporations in the 2016 elections.

The saffron party gained 94 seats while the Congress lost 121 seats this time.

In a series of tweets, Prime Minister Narendra Modi thanked the people of Gujarat and BJP workers for the victory.

"Thank you Gujarat! Results of municipal elections across the state clearly show the unwavering faith people have towards politics of development and good governance. Grateful to the people of the state for trusting BJP
yet again. Always an honour to serve Gujarat," he said.

He also appreciated the efforts of party workers and said the state government's pro-people policies have had a positive impact on the entire state.

"Today's win across Gujarat is very special. For a party that is serving in a state for over two decades to record such a phenomenal win is noteworthy. It is heartening to see widespread support from all sections of society,
particularly the youth of Gujarat towards BJP," Modi said in another tweet.

In a tweet, Shah, who himself voted in Ahmedabad on February 21, congratulated the people of Gujarat "for once more believing in the BJP's symbol of development and progress in the metropolitan local body elections."

Chief Minister Rupani took the opportunity to attack the Congress.

In his address to newly elected corporators and party workers in Ahmedabad, he said the voters "mercilessly thrashed" Congress, with many of its candidates losing their deposits and several leaders facing defeat.

"Its performance is so bad that even we feel bad about it," he said, and added that the real picture will be seen in 2022 when the state Assembly elections will be held.

"(The term) Anti-incumbency is being used by our opponents, but the election has proved there is no such word in Gujarat. BJP follows the process of development, and is not affected by anti incumbency. People are with the BJP because of its work, and their trust in BJP increases day by day.

"We have established Gujarat as a BJP stronghold. It is just a fight, the real picture will be seen in 2022," he said.

Elated by his party's good showing in Surat, AAP leader and Delhi chief minister Arvind Kejriwal has decided to hold a road show on February 26 to thank people of the city, party leaders said.