Branding Pakistani intelligence agencies including the Inter Services Intelligence as a 'rogue agency', the country's top nuclear scientist A Q Khan has said that it takes orders from the army chief and not the civilian government.

Charging that the ISI operated outside the law and totally ignored court orders, Khan, in a scathing attack on the military intelligence agency, said it was being used against politicians and as an 'extended arm of the dictators'.

Writing in a column in the daily The News, he said, "This had led to all the coups staged in the country," since the military takeover by late dictator Ayub Khan.

"Unfortunately, in our country the performance of the intelligence agencies is anything but commendable and is not something to be proud of. They have been the extended arm of dictators and been widely branded as rogue organisations," he wrote.

The intelligence agencies "operate outside the law, are least bothered about the judiciary and totally ignore court orders", wrote Khan, who was placed under house arrest after he admitted running a clandestine nuclear proliferation ring in early 2004.

In recent months, Pakistani authorities have removed or relaxed some of the restrictions imposed on him.

Khan wrote that during the regime of former military ruler Pervez Musharraf, "A general, an ISI colonel and eight subordinates forcibly sent us to Bannigala (near Islamabad) and kept us there for 10 hours."

He added, "During that time our house was totally ransacked, bedrooms, clothes, books, files, etc., searched and many things taken away, all this without any official warrant or court order to do so."

He claimed that his house was bugged with cameras and listening devices.

"In any civilised society, such despicable acts are totally unacceptable and are dealt with severely by the courts," he wrote.

"Ever since Ayub Khan's coup, our intelligence agencies have been used as servants for personal use and against political opponents. Their main task gathering information for national security and safety was superseded. It is said that our most expensive and extensive networks, like the ISI and the (military intelligence), are run by the army and take orders from the army chief, not from the civilian government. This has led to all the coups staged in this country," Khan wrote. 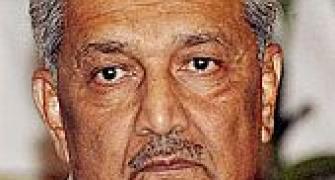 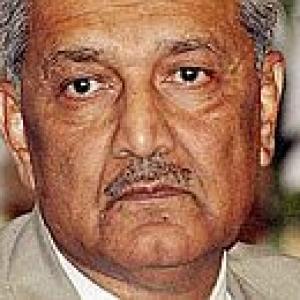 Some relief for Pak nuke scientist A Q Khan?

Dr A Q Khan on how Pak's nuke programme came about