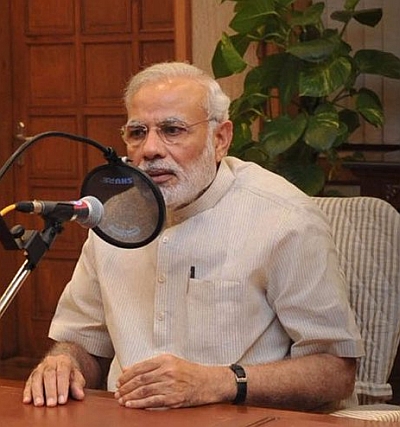 Almost a month after the goods and services tax rollout, Prime Minister Narendra Modi on Sunday said it has transformed the economy and marks an example of cooperative federalism as states have been partners in all the decisions related to the new indirect tax regime.

He said the 'smooth transition' of such a huge measure in a vast country involving crores of people was historic and can be a case study for universities around the world.

The prime minister said the priority of the government, while ushering in the GST (Goods and Services Tax), has been that there should no burden on the plate of the poor man.

In his monthly radio programme 'Mann Ki Baat', Modi also spoke about various other issues like the flood situation in various parts of the country and mentioned about the freedom movement in view of the upcoming Independence Day.

In the 30-minute broadcast also stressed the need for using only the environment-friendly items made by the poor people of the country during the festivals and hailed the performance by the Indian Women's Cricket team in the recent World Cup.

Referring to the GST which was rolled out on July 1, the prime minister said, 'one nation, one tax -- how big a dream has been fulfilled'.

Underlining that GST is more than just a tax reform, he said it ushers in a new culture.

"It has been about a month since the GST was implemented and I feel satisfied and happy when someone writes to me to say how the prices of goods needed by the poor have reduced," Modi said.

"GST, which I call 'Good and Simple Tax', has really made a very positive impact on our economy and in such a short span of time," he added.

He said the speed at which the smooth transition, migration and new registration has taken place has led to a new confidence in the country.

Describing GST rollout is an example of cooperative federalism, the prime minister said all states are partners in it and have a responsibility as well.

"All decisions were taken by the Centre and the states through consensus," he said.

Modi said is an example of success of the collective effort of India and marks a 'historic achievement'.

He said it was not only a tax reform but 'is a measure that lends strength to the new culture of honesty. In a way it is campaign for cultural improvement'.

The prime minister said the magnitude of the exercise is an example in itself and will surely be studied by the world.

Modi said the people from the North East, far off mountains and those living in the jungles have written letters, saying that initially there were fears but as they started understanding the GST, it became easy and business became easier.

"And the biggest thing is that the trust of customers in traders has started going up," the prime minister said.

"I am seeing how GST has impacted upon the transport and logistics sector, how the movement of trucks has increased, how their travel time has decreased, how highways have become clutter-free.

"With the increase in the speed of trucks, pollution has also reduced. Delivery of goods has also been speeded up. Besides making life easier, it also strengthens the economic progress," he said.

The prime minister said extensive relief is being provided to the flood-hit states and crop insurance companies have been asked to be pro-active in settlement of claims of the affected farmers.

He said the situation in flood-affected states including Assam, Gujarat, Rajasthan and West Bengal is being fully monitored and several agencies like the Army, the Indian Air Force, the National Disaster Response Force and paramilitary forces are engaged in rescue and relief operations.

"In this situation, everybody is going all out to help the affected people," he said.

To deal with the flood situation, a 24x7 control room is working with the helpline number 1078.

Noting that floods affect everything, he particularly talked about the farmers, saying they lose their crops in the deluge.

In this context, he said crop insurance companies have been asked to be proactive so that claim settlement can be done at the earliest.

The prime minister also said that the weather prediction by the Metereological Department nowadays is almost perfect and hence people should develop the habit of carrying out their tasks according to the predictions, so as to avoid losses.

The prime minister has already visited Gujarat and is expected to travel to Assam to take stock of the flood situation there on August 1.

Ahead of the 70th Independence Day, Modi invoked the Quit India Movement and exhorted the countrymen to use the same spirit to expel problems of communalism, casteism, corruption, terrorism, poverty and dirt from the country by 2022.

He asked the people to take a pledge to contribute in some way or the other to create a 'New India'.

Modi referred to the Quit India Movement launched on August 9,1942 by Mahatma Gandhi and the subsequent developments which resulted in the Britishers leaving India and the country getting freedom on August 15,1947.

"Just like five years between 1942 and 1947 became the decisive period, I can see another five-year period from 2017 to 2022 to make a resolve to end the problems of our nation," he said.

He identified these problems as communalism, casteism, corruption, terrorism, poverty and dirt and asked people to work for their removal in the same spirit of 'Quit India'.

"It is 70 years since we got Independence. Governments came and went, systems emerged and developed. Everyone contributed in own way to end the problems, raise employment, remove poverty and make the country progress. Successes were achieved but the expectations were also raised," the prime minister said.

He said this Independence Day should be celebrated as one of resolve to end the problems in next five years.

"If 125 crore people, remembering August 9, 1942, make a pledge on August 15 to contribute something as an individual, as a citizen, as a family person, as a person from a city or a village, as a member of a government department, there will be crores of pledges," Modi said.

He exhorted the citizens to use all kinds of fora to undertake this task, including through the online mode. The prime minister also sought ideas from the public which could be incorporated in his Independence Day speech that he will deliver from the ramparts of the historic Red Fort.

Interestingly, he said he has heard about 'complaints' that his previous Independence Day addresses were long and that he will try to keep it short this time.

He also referred to the upcoming season of festivals like Raksha Bandhan, Janam Ashtami, Ganesh Chaturthi and Diwali and urged the people to use the items made by the poor people of the country as it is relates to their economic empowerment.

Also, it has direct relation to the economic condition of the poor people," Modi said.

"This is the time when the poor people get an opportunity to make an earning," he said.

Giving the example of Diwali, he said the people should use environment-friendly diyas (earthen lamps) only.

Such things, he said, will give work to the poor people and help in their empowerment.