A wedding ceremony in rural Patna a fortnight ago where the groom was running high fever, two days before he died and his body cremated without being tested for COVID 19, appears to have set off the biggest infection chain in Bihar so far, health department officials said on Tuesday. 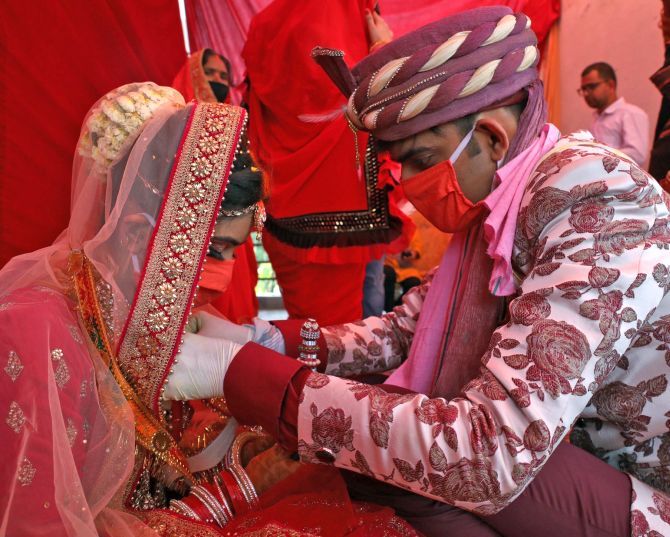 More than 100 people have tested positive in Paliganj sub-division of Patna district, about 55 km from the state capital, in the last few days, out of over 350 who have been tested upon contact tracing, they said.

Fifteen of his relatives who attended the wedding tested positive for the contagion and apparently infected others.

The officials, who requested anonymity, said the groom was a software engineer based in Gurugram and had returned home for his marriage in the last week of May. A few days after the 'tilak' ceremony, he started showing symptoms of the disease.

On June 15, the date of wedding, he was running high fever and wanted the ceremony to be deferred, but relented upon the insistence of family members who made him swallow paracetamol tablets and go through the rituals.

On June 17, his condition deteriorated significantly and family members made a dash to AIIMS, Patna, but he died on the way.

The body was cremated in a huff, without the authorities being informed. But somebody telephoned the district magistrate and narrated the whole episode. All close relatives of the deceased, who attended the ceremony, were tested on June 19. Of them 15 tested positive, the officials said.

As a measure to contain the spread of the disease, a special camp was set up at the village where the marriage took place on June 24-26 during which samples of 364 people were collected. Of them, 86 tested positive, the officials added.

The sudden explosion of the dreaded coronavirus has triggered panic in the area.

Although most who tested positive were asymptomatic, they have been admitted to isolation centres in Bihta and Phulwarisharif.

Patna district happens to be the worst-affected in Bihar with 699 confirmed cases till date and five casualties, according to figures provided by the administration.

The number of active cases is 372.

On Monday, when the state witnessed its biggest single day spike with 394 cases, Patna district accounted for more than 20 per cent of these.

About eighty cases were reported from Paliganj alone.