'We were scared about what would happen if these terrorists managed to enter the building.' 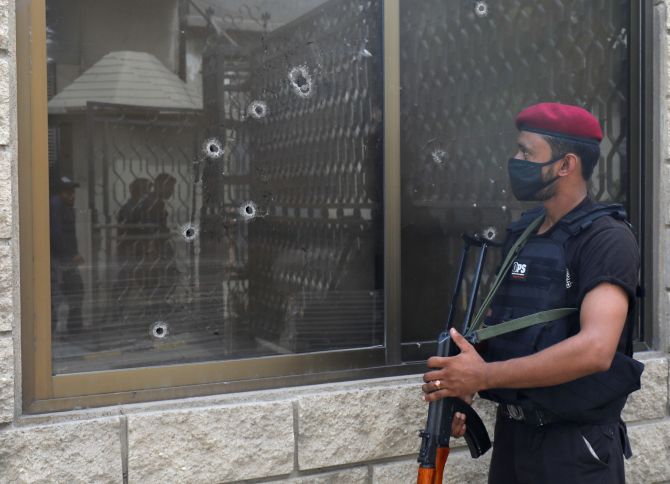 IMAGE: A police officer stands guard next to a bullet riddled window at the Pakistan Stock Exchange building in Karachi. Photograph: Akhtar Soomro/Reuters

Four heavily armed terorrists, believed to be from a banned Baloch terror group, on Monday, June 29, made a brazen attempt to take over the Pakistan Stock Exchange building in Karachi, killing three security guards and a police officer before being shot dead by security forces.

The terorrists, who arrived in a car around 10 am, opened indiscriminate fire and lobbed grenades at the main gate of the multi-storey building situated in the city's high-security commercial hub as they tried to storm it.

Armed with automatic machine guns, grenades and explosives, they tried to enter the compound leading to the Pakistan Stock Exchange building through a parking lot, but security forces foiled their attack within the compound itself, Karachi's Deputy Superintendent of Police (South) Jamil Ahmed said.

"The militants lobbed hand grenades and opened fire initially at the compound entrance to force themselves into the compound, but one of them was killed immediately and that pushed them back," he said.

Major General Omer Ahmed Bokhari, director general, Rangers in Sindh, told a press conference in Karachi that the attackers intended to not only enter the building, but also hold people hostage. 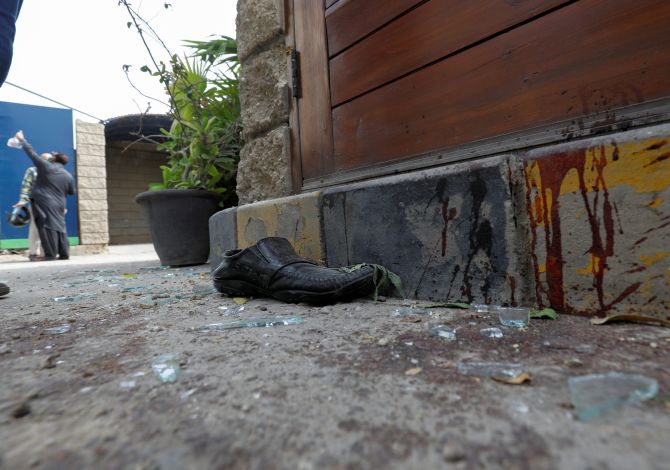 IMAGE: A shoe is seen next to a blood stain and broken glass outside the security post at the Pakistan Stock Exchange building. Photograph: Akhtar Soomro/Reuters

"Every terrorist was armed with weapons that included AK-47s, hand grenades, rocket launchers. They were also carrying food and water," General Bokhari said.

"The PSX (Pakistan Stock Exchange) is an important symbol of economic activity, hence the objective of these militants was to increase casualties here and hold hostages," hr added.

"It was an attempt to send a message to the world that Pakistan is not safe. They wanted to damage Pakistan's economic activity and harm investors' confidence," he said.

The police and Rangers personnel killed all the four terrorists near the entrance gates within eight minutes, the general said.

One sub-inspector and three security guards were killed in the heavy exchange of fire. 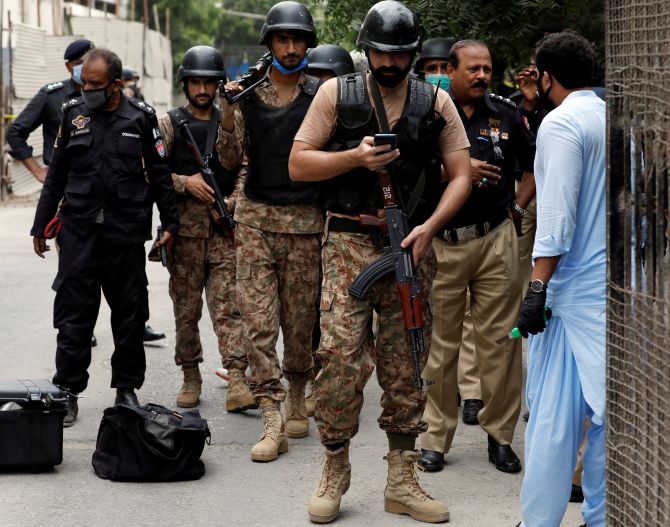 The Balochistan Liberation Army linked Majeed Brigade claimed responsibility for the attack. The group is banned in Pakistan, the United Kingdom and the United States.

The BLA has carried out several terrorist attacks in the past, including a suicide attack in August 2018 that targeted Chinese engineers in Balochistan, a November 2018 attack on the Chinese consulate in Karachi, and a May 2019 attack against the Pearl Continental hotel in Gwadar, Balochistan.

According to some media reports, the attackers were reportedly wearing clothes usually worn by police officers while they are off duty.

PSX Managing Director Farrukh Khan said the "number of people in the compound was lower than normal today as many people are still staying home due to COVID-19." Trading, he added, continued without interruption. 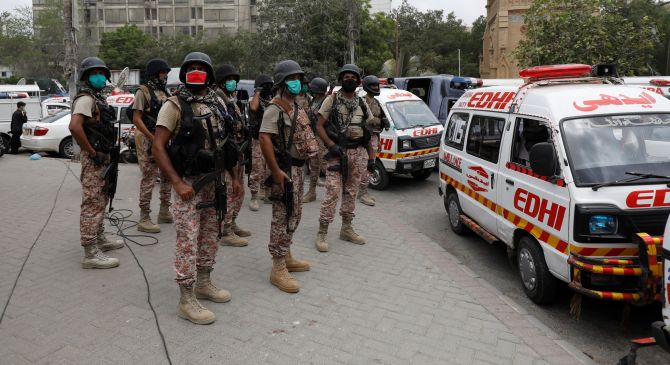 Sindh's Inspector General of Police Mushtaq Mahar said the bodies of the attackers have been sent for forensics.

"None of them managed to even get close to the main building. All four were killed at the entrance of the compound which leads to the PSX," Mahar said. 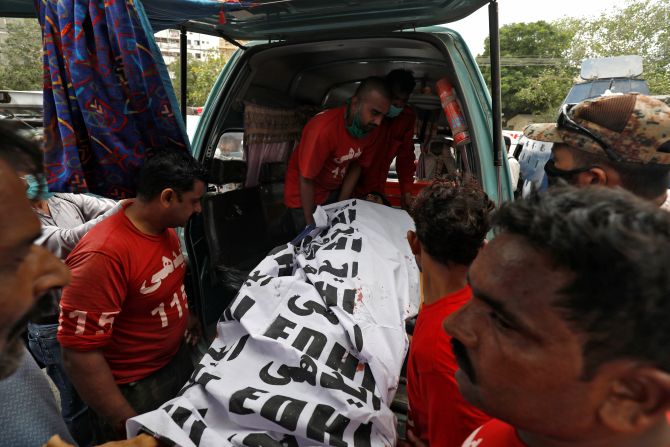 IMAGE: The body of a suspected attacker is removed from the site of the attack. Photograph: Akhtar Soomro/Reuters

Some traders told Pakistan television news channels that soon after the firing started, they huddled together in their offices and cabins as they were told to remain indoors.

"We were scared about what would happen if these terrorists managed to enter the building," a trader said. 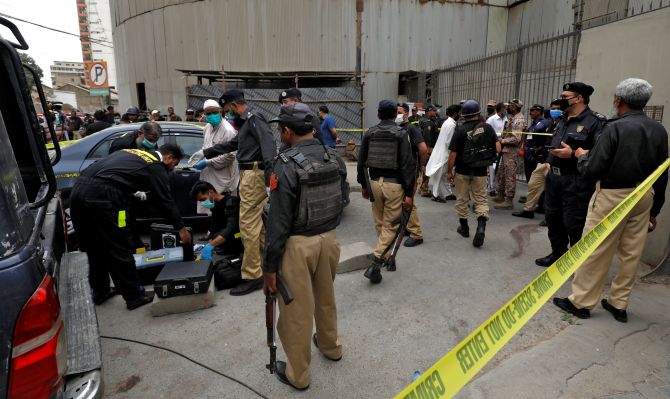 'India cannot tolerate peace in Pakistan,' Qureshi claimed, alleging that India was involved in the attack.

Ministry of External Affairs Spokesperson Anurag Srivastava said unlike Pakistan, India has no hesitation in condemning terrorism anywhere in the world including in Karachi. 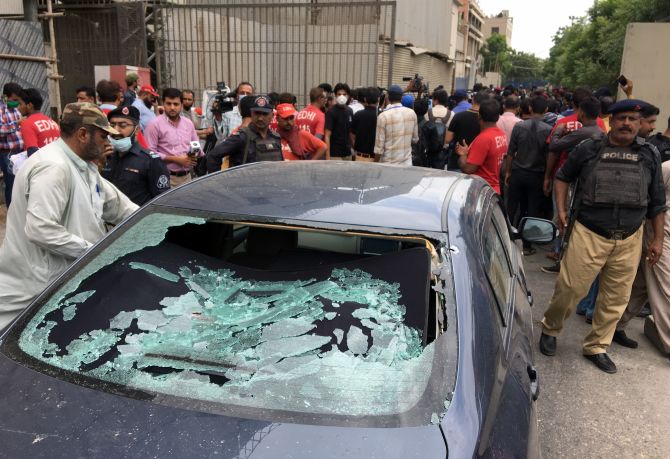 The attack occurred days after three low-intensity terror strikes were carried out in Karachi, Ghotki and Larkana in Sindh, leaving four people including two Rangers dead and a dozen injured.