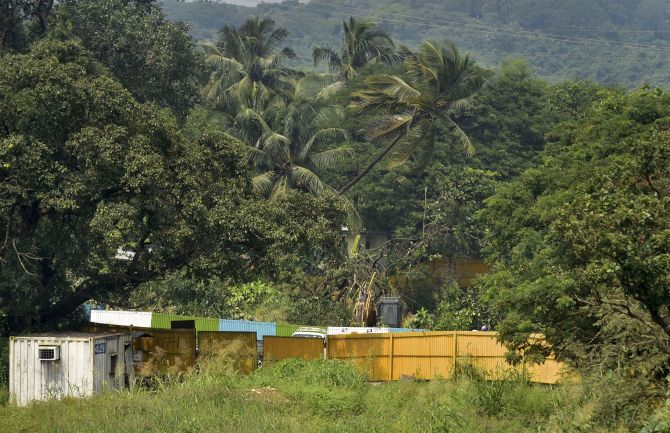 IMAGE: Workers cut down trees for the Metro car shed project in the Aarey colony of Mumbai. Environment activists are agitating against the act. Photograph: Mitesh Bhuvad/PTI Photo

A few green activists moved a fresh application on Saturday seeking stay for a week on the Mumbai Metro Rail Corporation Ltd's action of chopping 2656 trees in the area, a day after the HC dismissed four petitions filed by NGOs and activists challenging the decision of Tree Authority of the Mumbai civic body allowing felling of trees.

The activists have sought the stay so that they can approach the supreme court.

The action of MMRCL, which began cutting trees late Friday night, has met up with stiff resistance from green activists who have been protesting at the Aarey Colony.

The activists argued that an appeal would be filed in the apex court on Monday but by then the MMRCL would have completed cutting all the trees in the colony.

The application was taken up for urgent hearing by Justices S C Dharmadhikari and A K Menon in their chamber in
the high court.

Advocate Akshay Shinde, appearing for the MMRCL, told the judges that they initiated action of cutting trees only after the HC on Friday dismissed the petitions challenging the approval granted by the Tree Authority.

The bench, after hearing brief arguments, said it would not interfere with the Friday's order and refused to grant stay on the MMRCL action.

Opposing felling of trees, activists have been demanding that Aarey be declared as forest.

The issue has taken a political hue in the run-up to assembly polls, with the opposition parties blaming ruling Bharatiya Janata Party and Shiv Sena for their "failure" to save trees.

The MMRCL had clarified that the felling of trees was restricted only to a small area in the colony, and that it was necessary to ensure smooth transport for Mumbaikars.

After the high court dismissed the petitions on Friday, several activists gathered outside the colony in suburban Goregaon when the MMRCL began chopping trees.

Police on Saturday arrested 29 persons and detained several others for "obstructing" the MMRCL work.

The proposed rake depot for the metro-3 line (Colaba-Bandra-Seepz) will occupy 33 hectares in the southern part of the colony.

The high court, while dismissing the petitions, had noted that the tree authority's decision-making process was fair, transparent and based on reason.

The petitions, dismissed on Friday, were filed by a city-based NGO, activist Zoru Bathena and a Shiv Sena corporator.