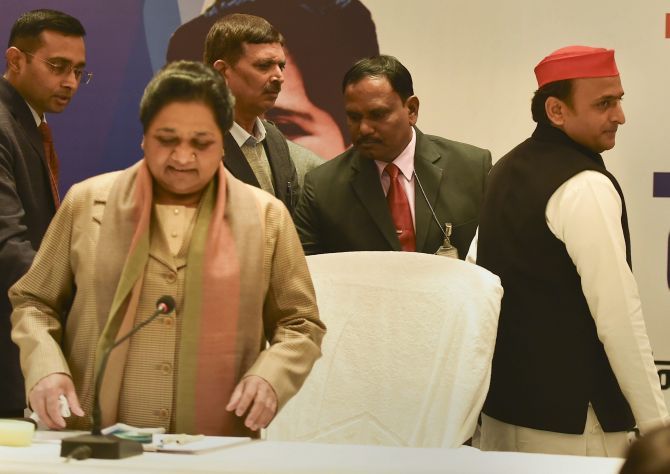 "Those who who did not like each other are talking about a maha gathbandhan (grand alliance). This is an alliance for corruption, anarchy and political instability," Yogi said as the Samajwadi Party and the Bahujan Samaj Party announced their alliance to fight Lok Sabha elections.

The BJP has respected 'Ram and roti' through its emphasis on development of all sections of the society and respect to the faith of the people, Yogi said at the party's national council meeting in New Delhi.

The UP chief minister also attacked the Congress, saying the party furthered the interests of a family, promoted casteism, regionalism and kept the country in limbo for 50 years.

"Under the leadership of Narendra Modi, the BJP brought the country out of this state of limbo through welfare schemes for all sections of the society and good governance," he said.

Yogi asserted that in the upcoming Lok Sabha polls, the BJP will perform better than it did in 2014 and a "strong and capable" government under Modi's leadership will be formed again.

"Ask any impartial person -- a rural woman, a solider, a farmer or youth -- they will all say 'Kaho Dil Se Modi Phir Se' (they will vouch for bringing in Modi once again)."

Listing out the achievements of the Modi government, Yogi said the country has gained confidence under the leadership of the Prime Minister and nationalism, development and good governance have charted a new direction in the four years of his government.

Terming the SP-BSP tie-up as 'gunaah bandhan', UP BJP chief Mahendra Nath Pandey on Saturday said it was a means to cover up crimes and an attempt to save each other's identity.

In a statement issued in Lucknow, Pandey said, "This is a 'gunaah bandhan', which has been forged to cover up crimes, while attempting to save each other's identity. This is an alliance of opportunistic forces, who had thrown Uttar Pradesh in the fire of misgovernance, corruption and crime."

He also said under the leadership of Prime Minister Narendra Modi, the BJP government at the Centre had worked for all sections of the society and given a new identity to good governance.

"By raising questions on EVMs today, Mayawati has admitted her defeat," Pandey said.

He claimed that the alliance will face defeat in Uttar Pradesh in the coming Lok Sabha polls, irrespective of the election method.

"Mayawati shook hands with the SP, which is guilty of unleashing atrocities on Dalits and the poor, deprived, exploited sections of the society," Pandey said.

He claimed that the alliance, which was a 'fallout of the fear of a Modi Tsunami', would have 'no impact on the BJP'.

BJP leader and UP Deputy Chief Minister Keshav Prasad Maurya termed the SP-BSP joining hands as an 'alliance of corruption and goondaism'.

"And let me make it clear that people are solidly behind Modi and the BJP will do better than it did in 2014. The backward community is backing Modi," he said at the national convention.

The parties kept the Congress out of the alliance, but said they will not field candidates in Amethi and Rae Bareli, represented by Congress president Rahul Gandhi and UPA chairperson Sonia Gandhi. 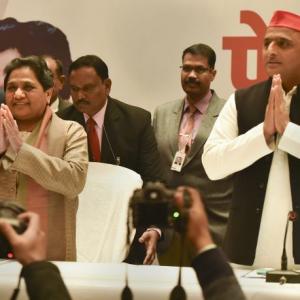 Cong maintains silence on SP-BSP tie-up, RLD hopes to get a place