The government has changed the country's flag code by allowing the tricolour to fly both day and night and be machine-made besides use of polyester. 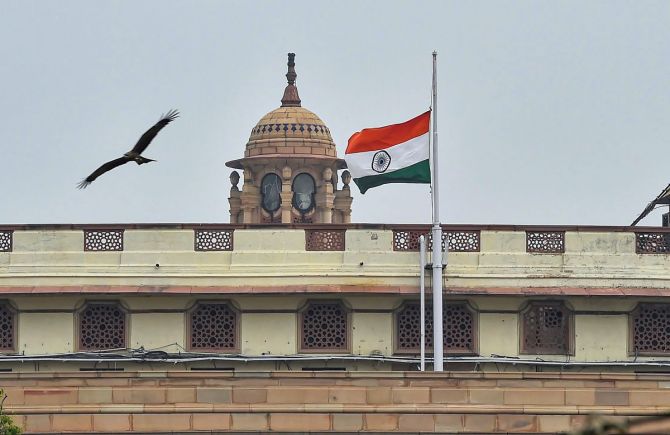 The move came as the government is going to launch a 'Har Ghar Tiranga' (hoisting of flag in every home) from August 13 to 15 as part of the 'Azadi Ka Amrit Mahotsav'.

In a letter to secretaries of all central ministries and departments, union home secretary Ajay Bhalla said the display, hoisting and use of the Indian national flag is governed by the Flag Code of India, 2002 and the Prevention of Insults to National Honour Act, 1971.

Earlier, the tricolour is allowed to be flown from sun rise to sun set, irrespective of weather conditions.

Similarly, paragraph 1.2 of Part-I of the Flag Code of India, 2002 shall now be read as under: 1.2. "The National Flag shall be made of hand spun and hand woven or machine made, cotton/ polyester/ wool/ silk khadi bunting."

Earlier machine made and polyester flags are not allowed to be used.

The Azadi Ka Amrit Mahotsav is being celebrated to commemorate 75 years of a progressive independent India.

The 'Har Ghar Tiranga' campaign has been launched to encourage the citizens to hoist the national flag in their homes from August 13 to 15.

The home secretary also enclosed with his letter the salient features of the Flag Code including the changes made on December, 30, 2021 and July 20, 2022 and the frequently asked questions (FAQs) about the use and display of the national flag.

"You are requested to ensure that these are widely disseminated among various organisations, PSUs under your administrative control," the home secretary said in his letter.