The Congress on Monday said the fiscal stimulus package announced by the government is "hopelessly inadequate" given the gravity of the economic crisis as it amounts to only Rs 1.86 lakh crore, which is 0.91 per cent of the GDP. The party sought a revised and comprehensive package of 10 per cent of the GDP.

"In our view, a fiscal stimulus of Rs 1,86,650 crore amounting to barely 0.91 per cent of GDP will be totally inadequate given the gravity of the economic crisis and the dire situation in which people find themselves," he said.

On Sunday, former union minister and Congress leader Anand Sharma accused the government of misleading people with its "trickery, fakery, quackery" and said the economic measures announced by the Centre amounted to only 1.6 per cent of India's GDP, ie worth Rs 3.22 lakh crore instead of Rs 20 lakh crore as claimed by the prime minister.

"We express our thorough disappointment and request the government to reconsider the stimulus package and announce a revised and comprehensive fiscal stimulus package of not less than Rs 10 lakh crore of real additional expenditure equivalent to 10 per cent of GDP," Chidambaram said at a press conference through video-conferencing.

He also accused the government of being opportunistic by pushing reforms. It is bypassing stakeholer consultation, legislation and discussion in Parliament on the package and this will be strongly resisted and challenged in the House, he added.

"The government is being opportunistic. They are just announcing what one person or one group of persons think is right without thinking through the consequences. Editorials and articles today point out downside of some of the announcements," Chidambaram noted.

The former finance minister said, "We note with deep regret that the fiscal stimulus package has left several sections high and dry, including the bottom half of the population (13 crore families), migrant workers, farmers, landless agricultural labour, daily-wage non-agricultural labour, workers who have been laid off or retrenched and those in unorganised or unregistered businesses or units who have lost their jobs."

He said the Congress has analysed the contents of the five tranches and in its considered opinion except for 1.86 lakh crore of additional expenditure, the rest of the announcements are included already in budget expenditure, front loading of some budgeted expenditure, regulatory measures, a number of liquidity measures, medium to long term plans or schemes and proposed reforms.

Thus the true value of fiscal stimulus package will be known when we know what is the additional borrowing in 2020-21, he said.

"This is an unnecessary fear. We will have to face that situation. As long as our foreign exchange reserves are high, inflation is under control, we are on the right path, demand grows and GDP picks up, why would a rating agency downgrade us," he asked?

Obviously fiscal deficit will go up but that should not be a matter of worry, he added. 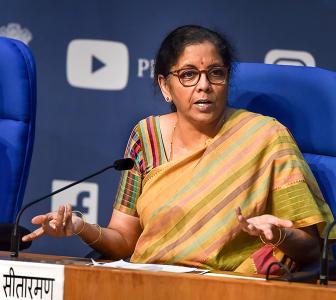