The Shiv Sena on Thursday asked Prime Minister Narendra Modi to honour the sentiments of protesting farmers and scrap new controversial farm laws, and said he will "grow bigger" in stature by doing so. 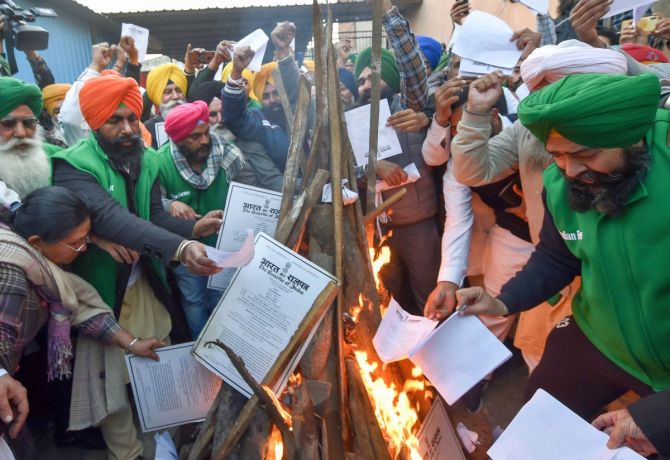 IMAGE: Farmer leaders burn copies of the new farm laws as they celebrate Lohri festival during their ongoing protest against the central government at Singhu border in New Delhi. Photograph: Manvender Vashist/PTI Photo

An editorial in the Shiv Sena mouthpiece Saamana also accused the Centre of trying to end the farmers' protest by using the Supreme Court as the front.

The SC on Tuesday stayed the implementation of the new farm laws till further orders and decided to set up a four- member committee to resolve the impasse between the Centre and farmers' unions protesting at Delhi borders.

The editorial said the deadlock over the issue continues despite the SC's decision, and noted that the farmers' bodies have rejected the committee's four members as they allegedly supported the farm laws earlier.

"Prime Minister Modi should welcome the protest and the courage of farmers. (He) should scrap the laws honouring the sentiments of farmers. Modi will grow bigger than what he is today. Grow bigger Modi!" the Marathi publication said.

The sentiments of farmers need to be understood if the government wants the situation not to deteriorate further, it said, referring to the tractor rally planned by farmers' bodies in Delhi on January 26.

It claimed that 60 to 65 farmers have made sacrificed their lives in the protest so far, and the country has not seen such a disciplined agitation till now after Independence.

The editorial also termed as "shocking" the Centre's claim before the Supreme Court that 'Khalistanis' have infiltrated the farmers' protest.

"It is also the government's failure if Khalistanis have infiltrated the protest. The government does not want to end the protest and wants to play politics by giving the agitation a colour of treason," it alleged.

It claimed "the government will block farmers by lifting the stay on the implementation of the laws once protesters at the Singhu border (near Delhi) return home".

"Hence, what has to happen will happen only now. The farmers' bodies are in a 'do or die' mood," it said.

The Marathi daily also asked if "lakhs of farmers" will be labelled as "anti-national" if they are not going to accept the Supreme Court's decision.