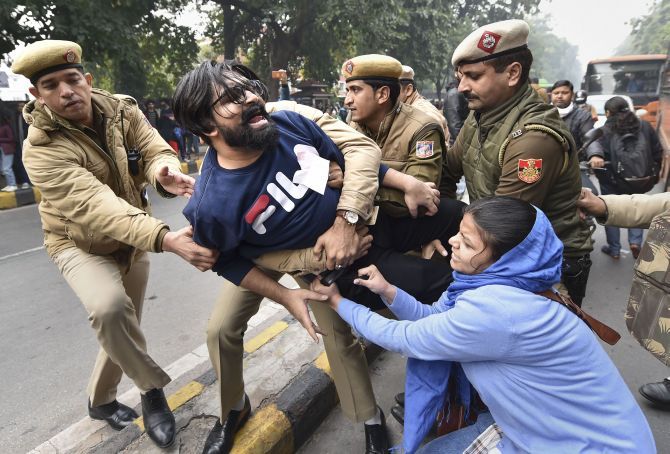 The Congress on Thursday accused the government of muzzling the voice of the people through 'draconian measures' such as shutting of internet services and imposing prohibitory orders.

The Congress said the Bharatiya Janata Party should be ashamed of this as it is the democratic right of every Indian to protest.

Congress general secretary Priyanka Gandhi Vadra warned that 'the more the government tries to suppress the voice of people, the louder it will become'.

She said the government has shut metro stations and internet services in Delhi and have imposed Code of Criminal Procedure Section 144, which prohibits assembly of four or more people.

Senior opposition leaders, a large number of students and activists were detained on Thursday by police on their way to two mega demonstrations against the new citizenship law as prohibitory orders and restrictions on internet and mobile phone services in parts of Delhi-NCR region inconvenienced thousands of people.

'It is the democratic right of every citizen to protest peacefully against the government. Imposing Section 144 and internet shutdowns are draconian measures to muzzle citizens by a government that is terrified of hearing what Indians have to say. BJP should be ashamed,' the Congress tweeted.

Gandhi said 'those who paid crores of taxpayers money in advertisement to make people understand, the same people are today shocked at the voice of the people and are bent upon shutting everyone's voice'.

The voice of people cannot be silenced by force, she said.

'Every time force is applied to dominate and rule, every time you beat and suppress, every time you push people to the wall, they will rise up stronger, their resolve will strengthen and their voice will grow louder,' she tweeted in Hindi.

'Our freedom movement was proof of this, our constitution is the guarantor of it and our people are the soul of it,' she added.

She also paid homage to freedom fighters Ram Prasad Bismil, Ashfaqulla Khan and Roshan Singh on their martyrdom day and took a swipe at the BJP leadership, saying the importance of their joint martyrdom attains greater relevance as those sitting in the government are wearing glasses of religion politics.