Lawyer Prashant Bhushan on Friday accused the government of misleading people by selectively quoting the judgement on Presidential reference on 2G verdict, claiming it clearly spelt out that auctioning was the way to go when commercial purpose and profiteering was involved.

He alleged that the government has gone on an "overdrive" after the Supreme Court's opinion on the 2G presidential reference, to project the judgement as a vindication of the government's policies.

"They (Ministers P Chidambaram and Kapil Sibal) are using the innocuous part of the judgement, which says that all natural resources don't have to be auctioned in all circumstances, to claim vindication. They have even used the SCs opinion to criticise the CAG," he told reporters.

Bhushan said he was happy that the Supreme Court has clearly said that auctioning of scarce natural resource is the way to go when commercial purpose and profiteering is involved.

He claimed that the recent coal block allocation would stand cancelled due to this Presidential reference judgement as there is enough evidence to prove that, like 2G spectrum allocation, private companies benefited by "sitting and trading on the value through leasing or sub-transferring."

"In view of this judgement, which is a concurring judgment of the court, all the allocations of coal blocks made by the government to private companies for commercial use (even for captive consumption) without auction, would have to be declared void.

"The government's dishonest spin being sought to be given to the judgement by its senior ministers is another clear sign of its dishonest intent," he alleged.

Lawyer Shanti Bhushan said the remarks made by ministers by coming out with their "versions" of the judgement were "contempt of court". 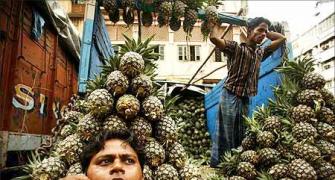 Charge for data, not for making calls: Sibal

No legal opinion for filing criminal case against Bhushan