Govt-farmers meet ends; next round of talks likely on Jan 15

The government's negotiations with farm unions to end over-a-month-long agitation appeared heading nowhere at the eighth round of talks on Friday as the Centre ruled out repealing the three contentious laws claiming nationwide support for reforms while the farmer leaders said they are ready to fight till death and their 'ghar wapsi' will happen only after 'law wapsi'. 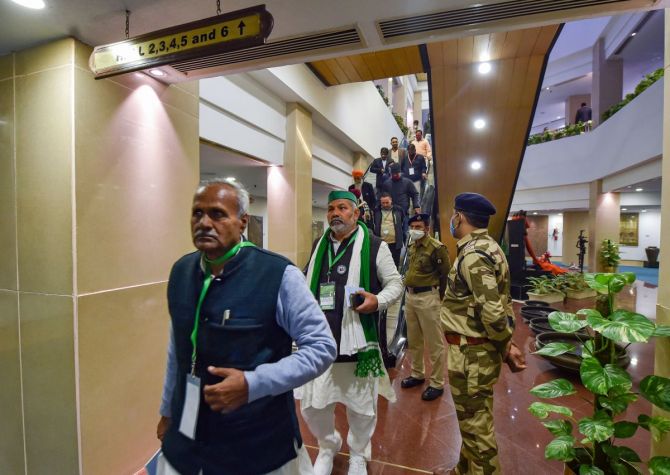 IMAGE: Farmers leaders leave Vigyan Bhawan after the 8th round of meeting with the Centre over the new farm laws, in New Delhi. Photograph: Manvender Vashist/PTI Photo

The next meeting has been fixed for January 15, amid indications that any headway will now depend on a Supreme Court hearing scheduled for January 11 on a batch of petitions related to the protest.

The farmer groups have also decided to meet on January 11 to decide their next course of action, even as many leaders said they have lost hope now that any resolution could be reached even in the next round of negotiations.

The meeting at Vigyan Bhawan in the heart of the national capital lasted for little over two hours, during which just about one hour of discussions took place, after which union leaders went on a maun vrat (vow of silence) holding placards with 'Jeetenge Ya Marenge' (We will win or die) and did not take a lunch break, while the three union ministers left the room for their own internal consultations.

Briefing the media after the talks, Agriculture Minister Narendra Singh Tomar said no decision could be reached as the farmer leaders did not present alternatives to their demand for the repeal of the laws. He hoped that the unions will come up with alternatives in the next meeting for the consideration of the government.

Union leaders, however, insisted they do not want anything less than the repeal of the laws and they are ready to fight till death. They also threatened that they are prepared to celebrate Lohri and Baisakhi festivals at their protest sites.

The two harvest-related festivals, one on January 13 and the other on April 13, are celebrated with much fanfare by the farming community in northern India. 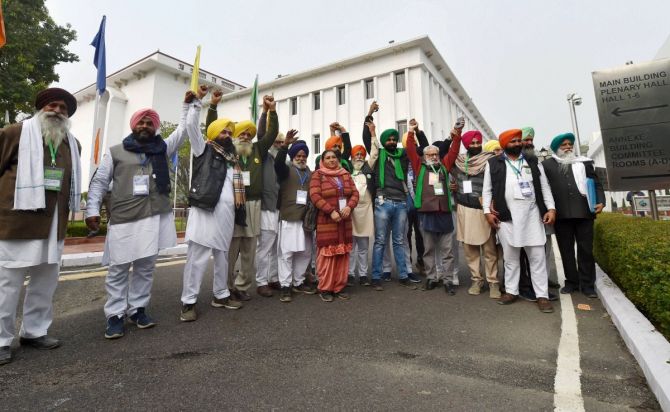 IMAGE: Farmers' representatives raise slogans as they arrive for the 8th round of talks with the government over the new farm laws at Vigyan Bhawan in New Delhi. Photograph: Manvender Vashist/PTI Photo

The union leaders also said the farmers, thousands of whom are staying put at Delhi borders despite extremely cold weather and heavy rains, will continue with their plan to hold a tractor rally on Republic Day on January 26.

Farmer representatives said the discussions between the two sides were not entirely cordial this time and the pitch was high at times, while emotions ran high outside the venue also. Woman farmer leader Ravinder Kaur of Jai Kisan Andolan, crying profusely, said many mothers have lost their sons and many daughters have lost their fathers but the government was not ready to budge.

"The government is testing our strength, but we will not bow down. It seems we will have to spend Lohri and Baisakhi festivals here at protest sides," farmer leader Joginder Singh Ugrahan said, adding that it was unlikely that any resolution can happen in the next round of talks as well.

Another union leader Hannan Mollah said farmers are ready to fight the government till death, but going to court was not an option.

Several leaders said the government suggested at one point that why farmer groups do not become a party in the ongoing case in the Supreme Court. Tomar, however, said the government did not suggest anything of that sort, though the issue came up because the apex court is already scheduled to hear related matters on January 11.

Sources said the next date has been decided after keeping in mind the January 11 hearing as the government feels the apex court may look into the legality of the three laws, besides other issues related to farmers' protests. 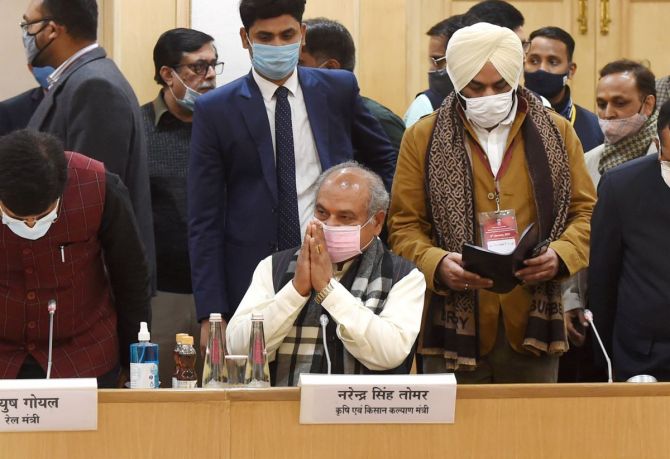 During the meeting, prominent farmer leader Balbir Singh Rajewal had said several Supreme Court orders in the past have declared agriculture a state subject but unions are not keen to take the legal route in the current scenario.

"Ideally, the Centre should not interfere in agriculture matters as various Supreme Court orders have declared farming a state subject. It seems you (the government) do not want to resolve the issue as talks have been happening for so many days. In that case, please give us a clear answer and we will go. Why to waste everyone's time," he said.

Another leader said at the meeting, "Our 'ghar wapsi' (return to home) can happen only if you do 'law wapsi' (repeal of laws)."

All India Kisan Sangharsh Coordination Committee member Kavitha Kuruganti, who was also present in the meeting, said the government told unions that it cannot and will not repeal these laws.

Later, Rajewal said that the government suggested to the unions that why don't they become a party in the ongoing case on three farm laws in the Supreme Court.

"We rejected their suggestion outrightly and said the farmers' unions didn't and won't approach the court. Our sole mission is to get these laws repealed and our agitation will continue till that happens," he said.

Asked whether there was any progress in talks beyond 50 per cent, Tomar said: "It is stuck at 50 per cent as of now."

In the sixth round of talks held on December 30 last year, some common ground was reached on two demands -- decriminalisation of stubble-burning and continuation of power subsidies -- after which Tomar had said that 50 per cent resolution has been reached as two out of four issues got settled.

But the seventh round of talks on January 4 again ended inconclusively as the unions stuck to their demand for a complete repeal of three farm laws, while the government wanted to discuss only "problematic" clauses or other alternatives to end the stalemate.

The government has presented these laws, enacted in September last year, as major agri-market reforms aimed at improving farmers' income and their lives, but unions have billed them as pro-corporate and against the existing mandi and minimum support price procurement systems.

Asked if the government is open to giving an option to states for implementing the laws, Tomar said, "Farmers have not given any such proposal. But, the government has time and again said it will consider all alternative proposals."

On whether the government is giving such a proposal to unions, the minister said it should come from farmer groups.

"Any proposal from me or you do not matter," Tomar told reporters. 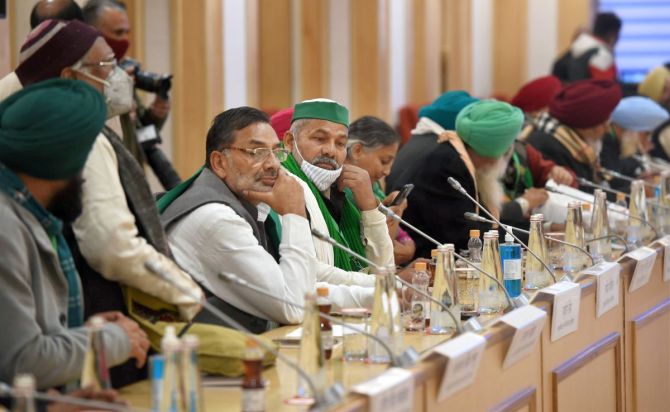 IMAGE: Bharatiya Kisan Union Spokesperson Rakesh Tikait and farmer representatives during the 8th round of talks with the government over the new farm laws, at Vigyan Bhawan in New Delhi. Photograph: Manvender Vashist/PTI Photo

Asked if the government thinks religious leaders like Baba Lakha Singh can mediate with farmers to resolve the issue, Tomar said: "We have not approached anyone directly... Baba Lakha Singhji, a Sikh religious leader, came to meet me as he is pained about farmers protesting in cold weather and he wished for an early resolution."

"He presented farmers' issue before me and I told him about the government's legal stand... I urged him to talk to farmer leaders," Tomar said.

The minister said the farmers can give their proposals to the government directly or through Baba Lakha Singh.

"We have respect for farmers and for religious leaders. Talks with Baba Lakha Singh happened in a cordial atmosphere. I am hopeful that he must have talked to the people concerned," he added.

The minister, who was accompanied by Food, Commerce and Railway Minister Piyush Goyal and Minister of State for Commerce Som Parkash during the talks, said the protesting farmers want the repeal of the laws, but there are many farmers across the country who support these legislations.

The minister said the government is respectfully holding talks with those opposing the laws and is also meeting those who are supporting the reforms.

Asked if the government will invite farm groups supporting the laws in the ninth round of talks, Tomar said there was no such plan as of now but it can be looked into in the future if required.

On whether the government was ready to set up an informal group to create convergence, Tomar did not give a direct reply and said the discussion on many issues take place during meetings.

At the outset, Tomar appealed to unions for discussions on the laws while keeping in mind the interest of farmers of the entire country, but farm leaders reiterated their demand that the new Acts must be withdrawn.

Before the start of the meeting, Tomar had also met Home Minister Amit Shah for about an hour.