Govt decides to host Aero India in Bengaluru in Feb

The defence ministry has decided to host the next edition of Aero India -- considered Asia's largest aerospace exhibition -- in Bengaluru in February, notwithstanding the coronavirus pandemic, officials sources said on Friday. The ministry took the decision to hold the biennial event as scheduled following inputs from major stakeholders including the domestic defence industry and global aerospace majors, they said.

The sources said the main event will be held from February 3-5 while the exhibition will be thrown open for general public on February 6 and 7.

Defence Minister Rajnath Singh has already held a number of internal meetings including one on Friday on hosting of the mega event in its traditional venue of Yelahanka Air Force station on the outskirts of Bengaluru.

"It was decided that the event will be hosted while taking maximum precaution against the coronavirus pandemic," said a source.

Since its inception in 1996, Bengaluru has been hosting the event.

In the event, the government will showcase India as an attractive destination for investment in the defence manufacturing sector besides highlighting series of initiatives it has taken to promote the domestic industry, the sources said.

A number of global defence majors and big investors are expected to participate in the event besides official delegations from several countries, they said.

Several leading aerospace companies have already offered to set up manufacturing bases in India provided they get big-ticket contracts.

United States aerospace giant Lockheed Martin has already said that it will not sell its newly rolled out F-21 fighter jet to any other country if India places an order for 114 planes.

Another aviation major Boeing too has announced that it is ready to set up manufacturing facilities for its F/A-18 Super Hornet aircraft if it bags the Indian Air Force contract.

It will be the first major global defence event in India after the country unveiled a series of measures like pruning of the import list of weapons systems and increasing the FDI limit from 49 per cent to 74 per cent in defence sector under the automatic route.

The government is also taking steps to implement an ambitious policy under which select private firms were to be roped in to produce key military platforms like submarines and fighter jets in India in partnership with global defence majors.

On August 9, the defence minister announced that India will stop import of 101 weapons and military platforms like transport aircraft, light combat helicopters, conventional submarines, cruise missiles and sonar systems by 2024.

In a related development, the Defence Research and Development Organisation (DRDO) on Monday identified 108 military systems and subsystems like navigation radars, tank transporters and missile canisters for the domestic industry to design, develop and manufacture.

The premier organisation said it will also provide support to industries for design, development and testing of these systems on a requirement basis.

It has set a target of next year in developing the 108 systems and subsystems.

India is one the largest importers of arms globally. According to estimates, the Indian armed forces are projected to spend around $130 billion in capital procurement in the next five years.

However, the government now wants to reduce dependence on imported military platforms and decided to support the domestic defence manufacturing.

The defence ministry has already set a goal of a turnover of $25 billion (Rs 1.75 lakh crore) in defence manufacturing in the next five years that included an export target of $5 billion (Rs 35,000 crore) worth of military hardware. 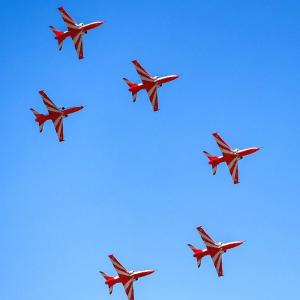 PHOTOS: The best of Aero India on Day 4