The government on Wednesday announced a raft of post-retirement employment possibilities for 'Agniveer' like priority in recruitment to the central paramilitary forces but protests erupted in Bihar and Rajasthan over the 'Agnipath' scheme which envisages recruitment of soldiers for a short four-year period and retirement of most without pension. 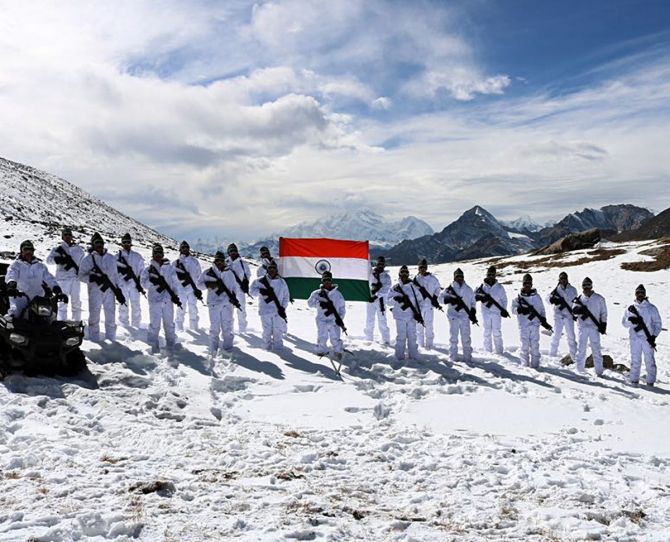 Army aspirants disrupted rail and road traffic in several parts of the state, including in Buxar district, where more than 100 young men stormed the railway station and squatted on the tracks, blocking the onward journey of Patna-bound Janshatabdi Express for nearly 30 minutes.

Reports emerged about the protesters hurling stones at Pataliputra Express, which passed through Buxar station, but there was no official confirmation.

In Muzaffarpur town, a large number of Army aspirants vented their ire by placing burning tyres on the roads around the sprawling Chakkar Maidan.

Some said they were exasperated to learn about the new scheme which came after two years of �no recruitment� by the armed forces despite their having cleared the requisite physical tests. Police used batons to break up the protest.

In Begusarai, the Army aspirants, many of them NCC cadets, staged a demonstration at the Mahadev Chowk where they carried a huge poster inscribed with the demand for withdrawal of the new defence reform initiative.

In Jaipur, around 150 people blocked the Ajmer-Delhi highway on Wednesday, police said.

According to Kardhani Station House Officer (SHO) Banwari Meena, around 150 protesters blocked the highway, demanding that recruitment into the armed forces should be done following the earlier method.

The SHO said the protesters were subsequently dispersed and the highway was cleared, adding that 10 people were arrested.

The Centre's announcement also failed to assuage the concerns of the opposition Congress which warned the 'transformative' 'Agnipath' scheme will reduce the operational effectiveness of the armed forces.

The main opposition party had a day before voiced serious apprehensions about the future of these soldiers most of whom will retire quite young after a short service of barely four years.

The government had unveiled the scheme on Tuesday that will overhaul the decades-old selection process to bring in fitter and younger troops to tackle future security challenges facing the nation.

Around 46,000 soldiers will be recruited this year between the ages of 17 and a half years and 21 years into the Army, Navy and the Air Force.

Home Minister Amit Shah's office on Wednesday tweeted 'Agnipath' is a visionary and welcome decision by Prime Minister Narendra Modi for a bright future of the country's youth.

'In this context, today the Ministry of Home Affairs has decided to give priority to Agniveers who have completed four years under this scheme in the recruitment of CAPFs and Assam Rifles,' the HMO India tweeted.

'Detailed planning work has started on this decision,' it tweeted.

A combative Congress, however, attacked the government, with party leader Rahul Gandhi warning 'Agnipath' will reduce the operational effectiveness of the armed forces whose dignity and valour must not be compromised.

Congress general secretary Priyanka Gandhi Vadra also hit out at the government and asked why it was making recruitment in the army its 'laboratory'.

'When India faces threats on two fronts, the uncalled for Agnipath scheme reduces the operational effectiveness of our armed forces. The BJP government must stop compromising the dignity, traditions, valour and discipline of our forces,' Rahul Gandhi said on Twitter.

Vadra said no serious thinking or consultation preceded the announcement of the scheme.

'Why is the BJP government making recruitment in the armed forces its laboratory? Is the government finding the long service of soldiers a burden? The youth are saying this 4-year rule is a hoax. Our ex-servicemen also disagree with it. No discussion, no serious thinking on the sensitive issue of army recruitment. Just arbitrariness,' she said.

The main opposition party had on Tuesday expressed concern about the future of the youth once they have completed the four-year contractual service under the scheme.

'After four years, at the age of 22 to 25, how will these youths build their future without any additional qualifications? Isn't it right that when a regular soldier also returns home after 15 years of service, most of the time he gets only a job as a guard or security guard in a bank? So what will this 23 to 25 year old youth do after four years of contract service,' Congress chief spokesperson Randeep Surjewala had asked.

'Will his life not be in a limbo and will he be attracted towards some wrong path in search of livelihood and good life? Will the Modi government respond to these concerns,' he had said articulating the displeasure of his party over the scheme.

Mindful of the concerns over the future career prospects of 'Agniveers', the Ministry of Education (MoE) has decided to launch a special three-year skill-based bachelor degree programme for them.

The degree programme offered by the Indira Gandhi National Open University (IGNOU) will be recognised both in India and abroad for employment and education, an MoE official said.

The Army, Navy and Air Force will sign a memorandum of understanding (MoU) with IGNOU for implementation of the scheme.

"The degree programme will recognise in-service training received by Agniveers as credits for graduation and will open up opportunities for them to pursue civilian careers of their choice. Under the programme, 50 per cent of the credits required for a graduate degree will come from skill training -- both technical and non-technical, received by the Agniveers," the MoE official said.

The programme is aligned with the norms of University Grants Commission (UGC), the National Credit Framework and National Skill Qualification Framework (NSQF) as mandated under the new National Education Policy (NEP).

The framework of the programme has been duly recognised by the regulatory bodies -- All India Council for Technical Education (AICTE), National Council for Vocational Education and Training (NCVET) and UGC.

The degree will be awarded by IGNOU as per UGC nomenclature -- BA, BCom, BA (Vocational), BA (Tourism Management) -- and will be recognised both in India and abroad for employment and education, he said.

Meanwhile, a day after the government unveiled the scheme, the Army said it will recruit 40,000 soldiers in the coming months.

"The Indian Army will recruit 25,000 'Agniveers' in the next 180 days and the process for recruitment of the remaining 15,000 will begin a month after that," Vice Chief of Army Staff Lt General B S Raju told PTI.

He said the recruitment drive will be conducted in all 773 districts across the country.