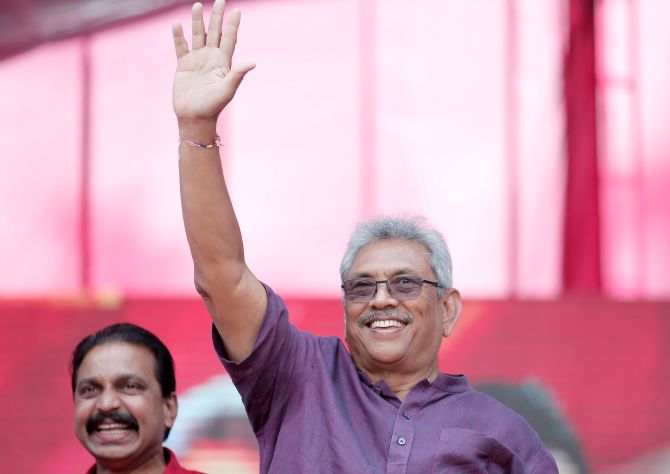 Gotabaya Rajapaksa, the man who ruthlessly ended Sri Lanka's nearly 30-year civil war with the Liberation Tigers of Tamil Elam, is both a controversial and a respected figure in the island nation where he is considered a 'war hero' by the Sinhalese Buddhist majority, but mostly distrusted by the minority Tamils.

The 70-year-old politician, who as a former military man attended the counter-insurgency and jungle warfare school in Assam in 1980, served as the defence secretary during his elder brother Mahinda Rajapaksa's tenure as president from 2005 to 2014.

In 1983, he also gained a masters in Defence Studies from the University of Madras.

Rajapaksa visited India in 2012 and 2013 in his capacity as the defence secretary.

While families of ethnic Tamils killed or disappeared during the civil war accuse Rajapaksa of war crimes, Muslims fear his popularity among Sinhalese Buddhists will further deepen the divide between the two communities post the Easter Sunday attacks carried out by Islamist extremists that claimed 269 lives.

The Hindus and Muslims together constitute approximately 20 per cent of Sri Lanka's population.

Though dubbed as the 'war hero', the role of Rajapaksa in ending the conflict with the LTTE with the death of its supremo Velupillai Prabhakaran in 2009 is quite divisive as he stands accused of violating human rights, a charge he vehemently denies.

During his first media interaction in October after being declared as a presidential candidate of the Sri Lanka People's Party (SLPP), Rajapaksa said if elected, he would not honour the country's commitments to the UN Human Rights Council on post-war accountability and reconciliation.

"We will always work with the United Nations, but I can't recognise what they (UN) have signed with (the) past governments," he said.

Sri Lanka co-sponsored a United Nations Human Rights Council (UNHRC) Resolution in September 2015 which made it committed to fulfil a range of measures dealing with human rights, accountability and transitional justice.

As many as 25 countries, including India, had voted in favour of the document in the 47-nation Council.

Rajapaksa is accused of overseeing torturing and indiscriminate killings of both civilians and combatants, and later of political assassinations.

He and his brother Mahinda are also accused of condoning sexual violence and extrajudicial killings allegedly by Lankan security forces during the war.

Rajapaksa, who was a top target of the Tamil Tigers, survived an assassination attempt in December 2006 by an LTTE suicide bomber. He is also considered to be tilted towards cash-rich China.

During his brother Mahinda's regime, China started investing heavily in infrastructure projects in the island nation as Lanka faced international isolation at the tail end of the civil war.

Critics say it was due to Mahinda that the country has fallen into the 'Chinese debt trap'.

The Hambantota port, which was funded by a Chinese loan during Mahinda's regime, was leased to Beijing in a 99-year debt-for-equity swap in 2017 after the country failed to pay off the debt.

Sri Lanka has historically been an important commercial hub along maritime routes due to its strategic position in the Indian Ocean, where China is increasingly making its inroads.

Just before the polls, Rajapaksa was embroiled in a controversy after some political parties, including the ruling United National Party (UNP), accused him of having US citizenship and claiming that he stayed and lived in America for over 10 years.

The Supreme Court in October also dismissed the petition challenging his citizenship and cleared him of all the allegations.

Born on June 20, 1949, in Palatuwa in Matara district, Rajapaksa, who hails from a high-profile political family, is the fifth of nine siblings.

His father D A Rajapaksa was a prominent politician in 1960's in the Wijeyananda Dahanayake government and also a founding member of the Sri Lanka Freedom Party.

Rajapaksa obtained his primary and secondary education at Ananda College in Colombo and obtained a postgraduate degree in Information Technology from the University of Colombo in 1992.

He joined the Ceylon Army as a Cadet Officer in 1971. In 1991 he was appointed Deputy Commandant of the Sir John Kotelawala Defence Academy and held the position until his early retirement from the army in 1992.

Following his retirement, Rajapaksa pursued a postgraduate diploma in Information Technology from the University of Colombo. Later he joined Informatics, a Colombo-based IT firm as its marketing manager.

Subsequently, he migrated to the US in 1998 and worked at the Loyola Law School in Los Angeles as an IT professional.

In 2005, he returned to Lanka to assist his brother Mahinda's presidential election campaign. During that time, he obtained a dual citizenship from Sri Lanka.

He was appointed to the post of defence secretary in November 2005 by then newly elected president Mahinda.

In this capacity, he oversaw the military operation which eventually defeated the LTTE in May 2009 and earned him the tag of a 'war hero'.

Rajapaksa is married and has a son.