Gotabaya arrives in India; to hold talks with Modi 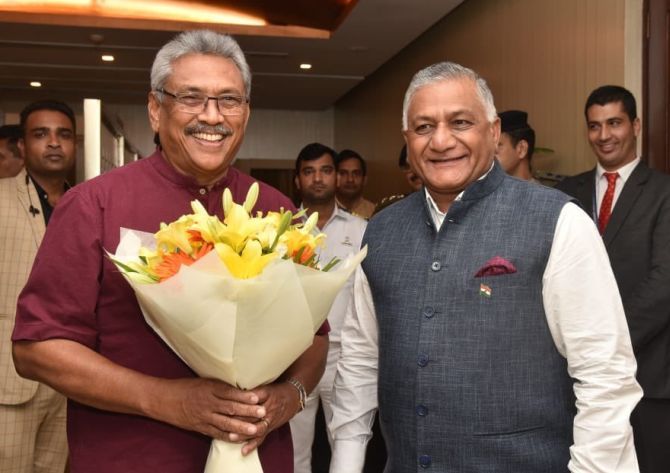 In his first overseas tour after taking reins of Sri Lanka over a week ago, President Gotabaya Rajapaksa arrived in New Delhi on a three-day visit, signalling his intent to deepen bilateral ties with India.

A plethora of issues including fulfilling aspirations of Tamil community in Sri Lanka, situation in the Indian Ocean region and steps to boost trade and investment ties are likely to figure in the talks.

Last week, India said it was looking forward to work closely with the new Sri Lankan government and hoped that it would be able to fulfil the aspirations of the Tamil community in that country.

In a tweet, before leaving for New Delhi, Rajapaksa said he was looking forward to strengthening bilateral relations with India.

"Leaving for my first state visit to India and looking forward to strengthening bilateral relations with Shri @narendramodi and Govt of India," he said.

Rajapaksa, a former defence secretary who is credited with ending the country's long civil war, was sworn in as the island nation's new president on November 18, a day after he won the closely fought presidential election in island nation.

The newly-elected Sri Lankan President was received at the airport by Union minister V K Singh.

There have been apprehensions among the minority Tamil and Muslim communities about the new government's policies towards them after the Rajapaksa clan tightened its grip over the country.