Sunayana Dumala, the wife of Indian engineer Srinivas Kuchibhotla, who was killed in an apparent hate crime in Olathe city, has asked what the US government will do to stop hate crimes against minorities. 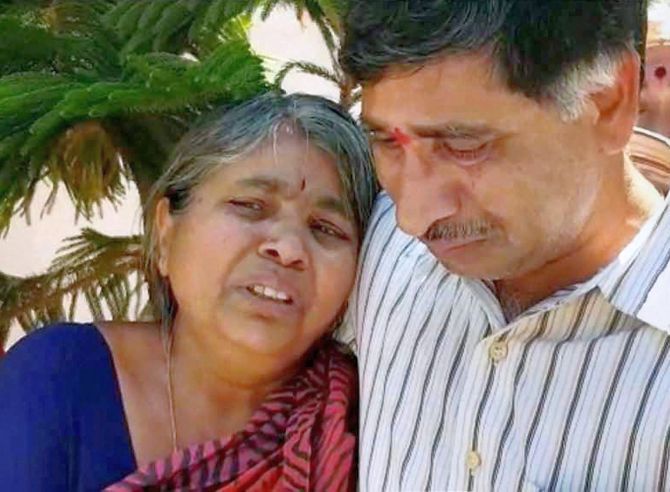 IMAGE: Parents of Srinivas Kuchibhotla are inconsolable after the killing of their son in America. Photograph: PTI Photo

The wife of Indian engineer Srinivas Kuchibhotla, who was shot dead in an apparent hate crime by a Navy veteran at a bar in Olathe city, has said that she had her doubts about staying in the United States but was assured by her husband that “good things happen in America”.

Speaking at a news conference organised by GPS-maker Garmin where Srinivas worked, Sunayana Dumala said reports of bias in the US make minorities afraid as she questioned “do we belong here”.

She said she now wonders what will the US government do to stop hate crimes against minorities.

Dumala said she was concerned about shootings incidents in America and had doubted whether they should stay in the country, but her husband said that assured her saying that “good things happen in America.”

Consul General of India in Houston Anupam Ray is supervising the current situation and providing all possible help for the grieving family and the community in Olathe area of Kansas.

“Immediately when the incident occurred, the consulate rushed Deputy Consul R D Joshi and Vice Consul H Singh to Kansas to be with the family of Srinivas at this trying moment,” Ray said.

Ever since, they have been with the family of Srinivas and have assured Sunayna of all possible support and help at this grieving moment, he said.

Consul Joshi also met the shocked and frightened Indian community in Olathe and Alok Madasani injured in the shooting on Wednesday night.

Madasani is now stable and has been discharged from the hospital.

A third person, an American man identified as Ian Grillot, 24, who tried to intervene also received injuries in the firing at Austins Bar and Grill in Olathe in Kansas City in the US state of Missouri.

A University of Kansas Hospital spokeswoman said he is in fair condition.

The incident evoked outrage from in the US and India with External Affairs Minister Sushma Swaraj expressing shock over the incident.

“I am shocked at the shooting incident in Kansas in which Srinivas Kuchibhotla has been killed. My heartfelt condolences to bereaved family,” she said in a tweet on Friday.

The shooter, Adam Purinton, reportedly got into an argument with the victims in the terms of racism, and shouted “get out of my country”, “terrorist” before shooting them.

He reportedly provoked them into an argument asking about their presence and work in his country, and how they are better than him.

According to police, Purinton left the bar after the argument and then returned with a gun and shot the three men.

Howe, however, declined to elaborate on the motive of the incident, although local police said they were working with the Federal Bureau of Investigation to investigate the case.

The FBI was looking at whether it was a hate crime.

An FBI spokesperson said agents and police canvassed the area on Thursday and the investigation continued till Friday. Some eye-witnesses have said the attack was racially motivated.

One bystander told the Kansas City Star that the gunman shouted “get out of my country” before shooting the Indian victims.

Grillot said in a recorded interview on Thursday that the bullet went through his right hand and into his chest, just missing a major artery but fracturing a vertebra in his neck.

The shooting incident comes at a time when hate crimes and acts of bigotry have risen notably in America after President Donald Trump came to power.

According to Garmin, Kuchibhotla and Madasani worked in the company’s aviation systems.

“Unfortunately, two associates on our Aviation Systems Engineering team, Srinivas Kuchibhotla and Alok Madasani, were shot. We are devastated to inform you that Srinivas passed away and Alok is currently recovering in the hospital,” Garmin said.

Kuchibhotla and Madasani hailed from Hyderabad and Warangal respectively.

Kuchibhotla posted on LinkedIn in 2014 that he managed helicopter programmes. He had a master’s degree in electrical and electronics engineering from the University of Texas at El Paso. He earned his bachelor’s degree from the JawaharlalNehruTechnologicalUniversity in Hyderabad.

A 2014 post on LinkedIn said Madasani was an aviation programme coordinator manager at Garmin.

Seema Hakhu Kachru
© Copyright 2021 PTI. All rights reserved. Republication or redistribution of PTI content, including by framing or similar means, is expressly prohibited without the prior written consent.