Gohil requests Cong to relieve him of Bihar charge

Senior Congress leader Shaktisinh Gohil, the All India Congress Committee in charge for Bihar for close to three years, has asked the party high command to relieve him from the post at the earliest. 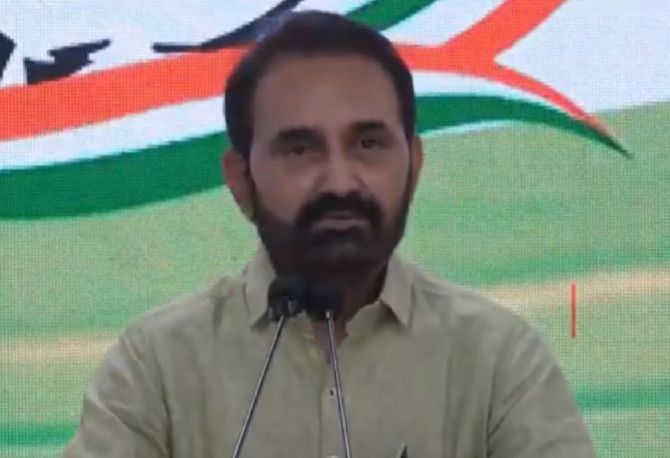 Gohil, who is also one of the party's national spokespersons and a Rajya Sabha member from Gujarat, made the disclosure on his official twitter handle.

'Due to personal reasons, I have requested our party high command to allocate me lighter work for next few months and to relieve me ASAP as #Bihar in charge,' Gohil tweeted, tagging his party, its units in Bihar, Gujarat and Delhi besides a number of colleagues.

Party sources claimed that Gohil, who tested positive for COVID-19 in November last, is yet to fully recover and his desire to be relieved of one of his many responsibilities is because of 'health reasons'.

Nonetheless, the ruling NDA latched on the opportunity to train its guns on the party which has been accused by its own allies of being the weak link in the opposition Grand Alliance.

'Shaktisinh Gohil's averment is an admission of the poor shape in which his party finds itself across the country, more notably so in states like Bihar. The Bihar Congress is faction-ridden and appears unlikely to look up in near future.

'Gohil must be wary of being made the scapegoat,' Janata Dal-United spokesman Rajiv Ranjan Prasad said in a statement.

BJP spokesman Nikhil Anand mocked at the leader coming out with the request on the micro-blogging network.

'It indicates that the party has ceased to exist on the ground. It is left with no workers. Its presence is now confined to Facebook and Twitter,' said Anand.

Notably, the development comes close on the heels of the Congress dismal performance in the assembly elections.

The party had contested 70 seats of the 243-strong assembly but won only 19 in the October-November polls.

The tally is eight less than the seats won by the grand old party in 2015 as a member of the grouping which also had Chief Minister Nitish Kumar's JD-U in it at that time.

More than one leaders of the opposition Grand Alliance has blamed the Congress poor performance for the five-party coalition falling short of the magic mark despite cashing in on the anti-incumbency sentiment.

Rashtriya Janata Dal leaders like Shivanand Tiwary have attacked leaders like Rahul Gandhi and Priyanka Gandhi for treating the polls as a 'picnic', the latter not taking part in electioneering despite being a star campaigner and the former addressing far fewer rallies than Prime Minister Narendra Modi.

Dipankar Bhattacharya of the Communist Party of India-Marxist Leninist, a partner in the grand alliance, has questioned why so many seats were 'wasted' on the Congress, claiming that the coalition would have achieved power had the Left which fought 29 seats and won 20 been given a larger share.