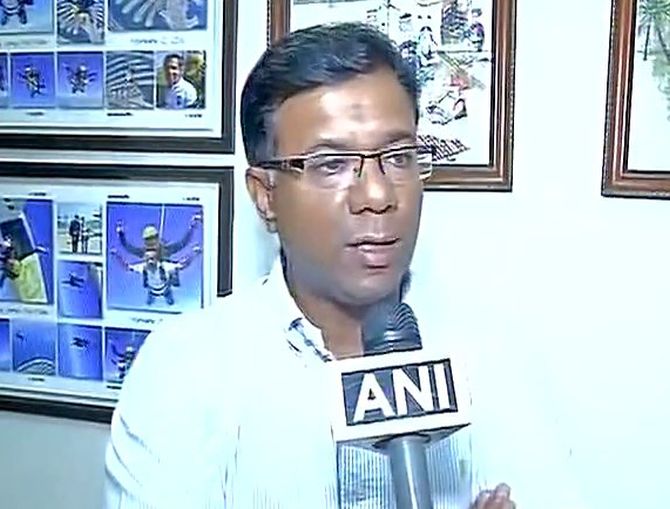 Congress MLA Vishwajit Rane on Thursday resigned as member of the Goa Legislative Assembly and also quit the party after absenting himself from voting during the crucial floor test, won by Chief Minister Manohar Parrikar.

Rane did not rule out the possibility of joining the Bharatiya Janata Party, saying ‘all options are open’.

The three-time Congress MLA submitted his resignation to pro-tem Speaker Siddharth Kuncolienkar minutes after the trust vote. He also quit the party after refusing to vote against the trust motion, defying the party whip.

The 45-year-old leader said he was upset with the party leadership as it failed to form the government in Goa despite people giving a mandate to the Congress in the assembly polls.

“The mandate in Goa was against the BJP. Now, they (the Congress) have given BJP the mandate on a platter,” he said.

Rane said the Goa Forward Party, whose three MLAs later extended support to Parrikar and which had contested the election on anti-BJP plank, wanted former chief minister Digambar Kamat to be elected as the Congress Legislature Party leader and not Luizinho Faleiro. However, the Congress leadership was not agreeable.

“My frustration comes from the manner in which the party is functioning. I am frustrated, disillusioned,” Rane said, adding he would meet his constituents and take a call on which party to join, if at all.

The Congress, which emerged as the single largest party in the House with 17 MLAs, suffered a setback with Rane’s resignation as its strength in the 40-member assembly got reduced by one.

Nationalist Congress Party legislator Churchill Alemao also voted in favour of the trust vote, though he has not yet formally given a letter of support to the BJP-led coalition government.

“I do not expect anything from the Congress party. They have betrayed the trust of Goa by not forming the government despite people giving them a clear mandate,” Rane said.

Rane said he would be re-contesting from Valpoi.

When asked if he could join the BJP, he said, “I am not ruling out anything. All options are open.”

Rane, however, said he has not yet spoken to Parrikar.
“Many others will follow me, you wait and watch,” Vishwajit, son of senior Congress leader and former chief minister Pratapsinh Rane, said.

The Congress party on the other hand remained clueless about Rane’s decision to miss the floor test.

“We did not understand why he remained absent on the floor of the House during voting,” Congress Legislature Party spokesman Aleixo Reginaldo Lourenco said.

The CLP which met after the floor test, has not yet taken any action against Rane.