Go after these inhuman Rapists!

Rape is personal. Rape happens, in most cases, when a man decides he 'wants' to have 'fun' with a woman. Or when he wants to 'punish' her.

A Woman In Today's India slams politicians who try to politicise rape. 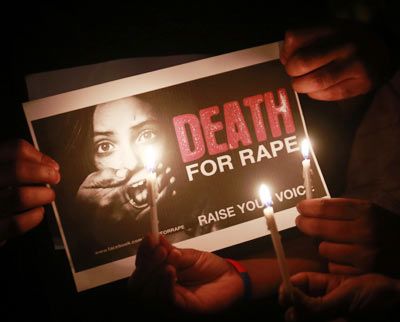 And F**k anyone else who tries to politicise rape.

Rape is not another arrow in your political quiver.

Let me tell you a few things about rape.

Rape happens, in most cases, when a man decides he wants to have fun with a woman. Or when he wants to punish her.

So he grabs her against her will. Pins her down. Bullies her. Takes full advantage of his superior physical strength.

She has not ASKED to be raped.

NO WOMAN EVER ASKS TO BE RAPED.

She screams for help, hoping somebody will end her torture.

Sometimes, she fights back with everything that she has got.

Sometimes, she submits as the fear and horror of what is happening to her overwhelms her.

Her clothes are ripped off.

Her breasts are bitten, squeezed and clawed.

Her legs are ruthlessly parted

and she is RAPED.

Tears of helplessness roll down her eyes as she is violated.

Can you get your heads around this?

This is what happens when a woman is raped.

And it is just the beginning of her torture.

She has to find her way to a police station to register the crime.

She has to get herself examined by doctors in a process that is intrusive and personal. But she knows she has to go through it if she wants her rapists caught.

She has to suffer to the physical pain until it heals.

She has to be brave enough, and find the mental strength, to heal the emotional scars.

She has to find the strength to go on with her life.

In this struggle, which you cannot even begin to imagine, the last thing she needs is for you to jump into the fray and exploit her.

It was not a Bangladeshi who raped her.

Nor was it an Indian.

Nor was it a Maharashtrian.

Men who claim to be human beings but cannot, honestly, classify themselves as any life form.

Men, who don't contribute to society in any way, who felt free to harm a woman who was doing her job.

Go after these inhuman rapists!

And, before that, hang your heads in shame!