Global vaccine supply hit due to Covid surge in India:

The 'terrible' surge of the coronavirus cases in India has severely impacted COVAX's vaccine supply in the second quarter of this year to the extent that there will be a shortfall of 190 million doses by the end of June, according to a joint statement by the World Health Organisation (WHO), United Nations Children's Emergency Fund (UNICEF), Global Alliance for Vaccines and Immunisation (GAVI) and Coalition for Epidemic Preparedness Innovations (CEPI). 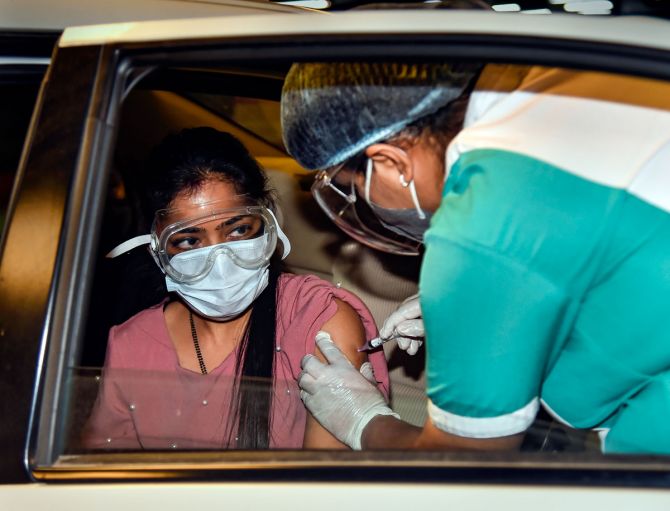 IMAGE: A health worker administers a dose of the COVID-19 vaccine to a woman, at a drive-through vaccination camp at Select City Walk mall, in New Delhi, on Thursday. Photograph: Kamal Singh/PTI Photo

A top Biden administration official also told United States lawmakers that due to the 'unprecedented COVID-19 crisis in India, the global supply of COVAX has been badly hit, so much so that there are many parts of the world where one shot has been dispensed to health workers or frontline workers and the second shot has not been forthcoming'.

'Countries that are advanced in their vaccination programmes are seeing cases of COVID-19 decline, hospitalisations decrease and early signs of some kind of normality resume. However, the global picture is far more concerning,' the statement said.

Giving a call to action to equip COVAX to deliver 2 billion doses in 2021, the statement said, 'We are seeing the traumatic effects of the terrible surge of COVID-19 in South Asia -- a surge which has also severely impacted global vaccine supplies.'

It added that COVAX has proven it works as the global mechanism for equitable access to COVID-19 vaccines, having delivered over 70 million doses to 126 countries and economies around the world since February -- from remote islands to conflict settings -- managing the largest and most complex rollout of vaccines in history.

Over 35 countries received their first COVID-19 vaccine doses thanks to COVAX.

'However, the terrible surge of the virus in India has had a severe impact on COVAX's supply in the second quarter of this year, to the point where, by the end of June we will face a shortfall of 190 million doses,' the joint statement said.

It said even though COVAX will have larger volumes available later in the year through the deals it has already secured with several manufacturers, it warned that 'if we do not address the current, urgent shortfall, the consequences could be catastrophic'.

It said the pandemic has just taken a frightening new turn, as a deadly surge of cases rages across South Asia and other hotspots.

The global agencies called on nations to share doses 'now', saying the United States and Europe have collectively pledged to share 180 million doses.

'But we still need more, we need them to go through COVAX, and we need them to start moving in early June. At least one billion doses could be shared by wealthy countries in 2021.

'COVAX's need for doses is greatest right now. Countries with higher coverage rates, which are due to receive doses soon, should swap their places in supply queues with COVAX so that doses can be equitably distributed as quickly as possible,' it said.

The Serum Institute of India (SII), the world's largest vaccine manufacturer, is the key supplier of AstraZeneca doses to COVAX.

According to the agreement between GAVI and SII, which included funding to support an increase in manufacturing capacity, SII is contracted to provide COVAX with the SII-licensed and manufactured AstraZeneca-Oxford vaccine (known as Covishield) to 64 lower-income economies participating in the Gavi COVAX AMC (including India), alongside its commitments to the Government of India.

However, supply of vaccines from SII to COVAX has been impacted as the second wave of the COVID-19 pandemic ravages India.

Last week, Ghebreyesus had said that once the devastating outbreak in India recedes, 'we also need the Serum Institute of India to get back on track and catch up on its delivery commitments to COVAX.'

UNICEF had also noted with concern that the devastating surge in coronavirus cases in India has impacted vaccine supplies to the COVAX facility.

'Among the global consequences of the situation in India, a global hub for vaccine production, is a severe reduction in vaccines available to COVAX. Soaring domestic demand has meant that 140 million doses intended for distribution to low-and-middle-income countries through the end of May cannot be accessed by COVAX. Another 50 million doses are likely to be missed in June,' Fore had said in a statement last week.

A note to editors in the UNICEF statement had said that 'shortfall numbers are based on delays related to shipments from the Serum Institute of India (SII) only'.

Other delays related to the original COVAX delivery schedule are expected to be made up by the end of June.

'There is currently no timetable to resolve SII-related delays,' the note said.

The COVAX facility is slated to deliver its 65 millionth dose in the coming days when it should have been at least its 170 millionth.

COVAX is the only global initiative that is working with governments and manufacturers to ensure COVID-19 vaccines are available worldwide to both higher-income and lower-income countries.

UN Secretary General Antonio Guterres, speaking at a virtual event by the Ikea Foundation, Purpose and the UN, expressed concern that the 'recent surges in South Asia and elsewhere show that COVID-19 is still very much with us'.

"More than 80,000 people died in the past week alone. We are in a war against this virus. To achieve victory, we need to put our economies and societies on a war footing. We need a true global vaccination plan," he said.

He encouraged all companies, particularly those with global representation, to look beyond headquarters and focus on the most vulnerable countries and communities, from South Asia to sub-Saharan Africa.

Meanwhile, speaking to members of the Senate Appropriations Subcommittee on State and Foreign Operations for a hearing on the Fiscal 2022 Budget Request for the US Agency for International Development (USAID), USAID Administrator Samantha Power said, "COVAX has suffered a big blow given the scale of the pandemic in India."

"The Serum Institute of India, which had planned to supply upwards of 140 million doses by the end of June, has had to pull back that supply because of the domestic emergency," Power said responding to a question on the vaccine crisis that has been created across the globe due to the scale of the pandemic in India.

"COVAX now is looking to countries like ours and other countries around the world to contribute supply, to donate supply," she said.

"The biggest issue for them right now is that there are many parts of the world where one shot has been dispensed to, for example, health workers or frontline workers. And the second shot has not been forthcoming because the expected supply from India had to be pulled back due to the crisis in India," Power said.

"It is in our interest that health workers and frontline workers get vaccinated everywhere in the world as a foundation for larger-scale vaccination. I think COVAX's biggest challenge so far has been a lack of financing, lack of supply, more than any issues with country selection," she said.

Last week, President Joe Biden announced that the United States is looking to donate 80 million vaccine doses by the end of June, which is five times more than what any other country has donated to COVAX.

Senator Chris Coons said the variant that emerged in India is far more transmissive than the base variant. It has just made it to his home state of Delaware and is circling the world, he said.

"We face an uncertain future as more and more variants will develop that could be both more transmissive and more lethal," the Delaware senator said.

Power said the main challenge is the supply of these vaccines.

"The key is ensuring that vaccines are available at scale and at cost. So we are also in dialogue with the pharmaceutical companies to try to ensure that a public good like vaccination, like pandemic prevention and response is resourced.

"But the biggest challenge that we face is just a shortage of supply, which I think these donations (by the US) will begin to address. But we hope that the G7 and other international gatherings will allow other countries also to step up," she said.

At a separate Congressional hearing, Rochelle Paula Walensky, director of the Centers for Disease Control and Prevention, told lawmakers that over the last year, the US has trained more than 10,000 infection control preventionists in India.

The CDC has had a regional office in India for about two decades now, Walensky pointed out.

Goldman Sachs CEO David M Solomon told the members of the Senate Banking, Housing and Urban Affairs Committee that his heart goes out to the people of India and others around the world who continue to suffer from the virus.

Goldman Sachs has announced an additional $10 million commitment to support the relief-and-recovery efforts in India, which is home to three of its offices and thousands of its people, he said.

"Our funding will be deployed to support frontline health facilities that are leading the fight against COVID-19, including ongoing vaccination efforts. It will also be used to support initiatives promoting mental health in several cities across India and to support communities with economic recovery," Solomon said.

The COVID-19 Vaccines Global Access or COVAX is a worldwide initiative aimed at an equitable access to COVID-19 vaccines directed by Gavi, the Vaccine Alliance, the Coalition for Epidemic Preparedness Innovations and the WHO.