Covered in mud, several men were safely pulled out one after the other from a slush-covered tunnel by Indo-Tibetan Border Police personnel in the Tapovan power project area that was swept away by a flash flood triggered by a glacier break in the Chamoli district of Uttarakhand on Sunday. 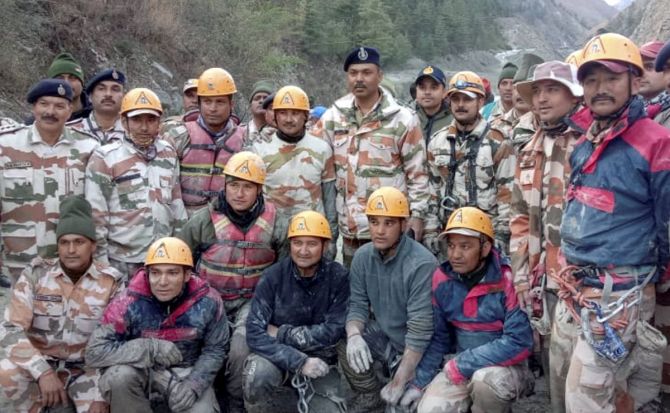 IMAGE: ITBP rescue team at Tapovan Tunnel, after a glacier broke off in Joshimath in Uttarakhand’s Chamoli district causing a massive flood in the Dhauli Ganga river, on Sunday. Photograph: PTI Photo

In a video of the operation shared by the border force, the rescuers can be seen raising slogans of 'dum lagakey haisha' while retrieving a couple of men through the vertical and narrow snout of the tunnel with the help of a rope line.

Those present at the spot motivated the men in action with 'bahut badhiya' and 'shabaash', 'jo bole so nihaal' and 'jai ho' slogans.

One of the workers rescued from the tunnel was seen taking a euphoric leap as the ITBP personnel patted his back in recognition of the grit and endurance displayed by him despite being hit by a disaster and being swamped with mud.

"Apna bhai aa gaya (our brother is back)," said a local who works in the project area as another official summed up the mood in the disaster zone by saying 'nayi zindagi mili (those rescued got a new life)'.

SEE: Man screams with joy after being rescued from the tunnel

Multiple teams of the force, with personnel wearing protective gear and helmets, were rushed to the Tapovan power project site from their 1st battalion base in Joshimath and the ITBP mountaineering and skiing institute located nearby in Auli to launch search and rescue works.

Armed with mountain rescue gear, ropes, pulleys and carabiniers, the ITBP men were seen taking out the workers and putting them on stretchers that they brought along with them.

ITBP spokesperson Vivek Kumar Pandey said in Delhi that his personnel stationed at the Joshimath base heard a 'large bang and screams of people' shortly after 10.45 am when the tragedy is stated to have struck the two dam sites near the Raini village in Chamoli.

A flash flood in the Dhauli Ganga river caused large-scale devastation in the upper reaches of the ecologically fragile Himalayas.

"A total of 12 workers have been rescued from the tunnel site till now. There is a second tunnel too where the rescuers are working," Pandey said.

Chamoli, about 270 km from state capital Dehradun, is a border district along the Line of Actual Control (LAC) with China and it is well known for the Badrinath shrine that is located very close to the last Indian village in Mana.

The ITBP has a large deployment here as part of its mandate to guard the LAC.