Union minister Giriraj Singh on Tuesday mocked his National Democratic Alliance colleagues for attending 'iftar' parties, drawing sharp reactions from them that prompted Bharatiya Janata Party chief Amit Shah to step in to douse the fire by admonishing the fiery Hindutva leader and asking him to avoid making such comments. 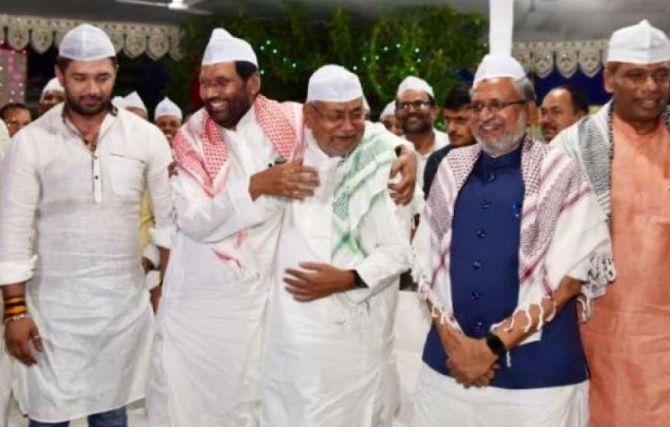 "How beautiful would the picture have emerged, had phalahaar (a fruit feast) been organised during Navaratra with the same fervour with splendid photographs taken. Why do we lag behind in observance of our own karm-dharm (religious customs) in public, while staying ahead in pretension," he tweeted in Hindi.

A known detractor of Kumar since the days when he served in the state cabinet under him, Singh appeared to have aimed his barb specifically at the chief minister as all photographs featured him wearing a skullcap and a namaz kerchief covering his shoulders.

Senior Bihar BJP leader and Deputy Chief Minister Sushil Modi was also seen in one of the pictures.

The Begusarai MP's remarks met with nonchalance from Kumar, who told journalists: "He indulges in such antics so that you people make him newsy."

The remarks also met with strong disapproval from Sushil Kumar Modi, Singh's senior in the BJP.

"I have been hosting Iftar parties for 25 years. I also organise Holi Milan feasts. Those who are coming up with taunts do not have the heart to offer a treat to people on Holi... How would they appreciate the catholicity of a Hindu hosting iftar party?" Modi said.

He said he was unaware of Singh's tweet and was only responding to the inputs from journalists.

Apparently sensing the tension between the BJP and the Janata Dal-United following Kumar's refusal to join the Narendra Modi government, Sushil Modi said, "Let there be no doubt in anybody's mind. The NDA in Bihar is intact and all efforts to drive a wedge between allies are doomed to fail".

Lashing out at Singh, JD-U leader and state minister Ashok Chowdhury said, "Had anybody stopped Giriraj from arranging phalahaar during Navaratra?"

"Giriraj must remember that his party is part of a coalition government in Bihar and he owes his big victory in the Lok Sabha poll in no small measure to the support of our leader (Nitish Kumar)," Chowdhury said.

As fire within the ruling coalition raged, Shah called up Singh and admonished him for his tweets attacking the NDA leaders, sources said.

The BJP president also asked him to avoid making such comments.

After Kumar, who is also JD-U president, declined one ministerial berth offered to his party by the BJP in the Modi government, the ties between the two main Bihar parties have strained.

After the Modi government was sworn in, Kumar expanded his ministry by inducting eight members from his party. No BJP member was part of the expansion.

NDA sources believe that disparaging comments by Singh have a potential to harm the ties between the two parties. This may have prompted Shah to step in, they added.